The Storm, currently fourth on the NRL table with four wins through their first six games of the season, could even be missing the playmaker for longer than just a week. 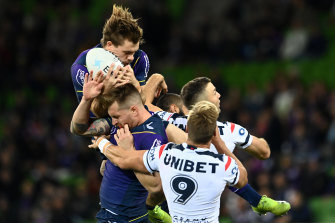 “Paps unfortunately did a number on his shoulder, he will be out for a week or two,” he said.

“[But] He’s tough, and we don’t expect he will be on the sidelines any longer than two weeks.”

Brenko Lee is also unavailable for selection after suffering another calf injury and is set to spend multiple weeks on the sidelines.

But in better news, co-captain Dale Finucane has been at least named in the extended squad for Sunday night’s game.

“He still has to get through a few tests before game day, but fingers crossed [he plays],” Hoffman said.

In what is one of the most eagerly-anticipated clashes each home and away season, the Storm will host the Warriors at AAMI Park on Anzac Day from 6:15pm.

Not only are the Storm coming off an impressive win over their arch nemesis, Sydney, the Warriors on Sunday ended St George Illawarra’s four-game winning streak with a 20-14 victory.

How will AFL player pay cuts work – and will they change the game?