Warrington: Samoan stars Joseph Suaalii and Junior Paulo are facing potential bans for next week’s Rugby League World Cup semi-final after being placed on report in their side’s historic victory over Tonga.

Samoa beat Pacific island rivals Tonga 20-18 in Warrington on Monday morning (AEDT), to book a semi-final clash with England at Emirates Stadium in London next weekend. It is the first time Samoa have reached the final four of a World Cup. 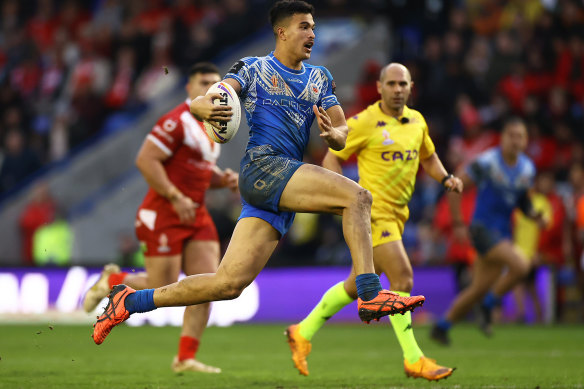 The win was somewhat soured by the cloud now hanging over the heads of Paulo and Suaalii.

Teenage sensation Suaalii, who had an inspired game, was put on report for raising his knees to the head and shoulder of Tongan back-rower Felise Kaufusi in the eighth minute of a nail-biter at Halliwell Jones Stadium.

Suaalii has a history of raising his knees while running in the NRL. He was given a warning by the NRL’s match review committee because of his running style following an incident involving Wests Tigers hooker, and Samoan teammate, Fa’amanu Brown in round 23.

At the time, Suaalii avoided a charge but was warned that a repeat offence could lead to a ban. The warning from the NRL, however, will not carry any weight with the World Cup match review committee, which is expected to hand down charges later on Monday. 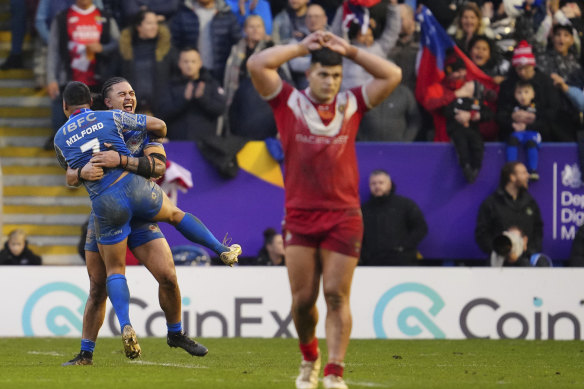 Paulo was also put on report for elbowing Tonga’s David Fifita in the throat while running the ball late in the game.

The Samoans are privately concerned about the pair’s chances of escaping a suspension from the largely UK-affiliated match review committee. Publicly, though, they say they have nothing to worry about. Samoa coach Matt Parish heaped praise on Suaalii for his performance, and expected him to dodge a ban.

“I would be surprised if anything came of that,” Parish said. “He was unbelievable, wasn’t he, for a 19-year-old kid. He has been unbelievable for our group for a young man. He has been well-schooled and well-educated. Certainly, I think he is enjoying the ride at the moment.

“He is pretty good in any position you put him in. He has a long career ahead of him, which is going to be exciting to watch. He has been part of this and I am pleased for him too, because he could have chosen to play for Australia. He committed to Samoa like a lot of these young men. which is pleasing.”

With his team leading by two points late in the game, Suaalii busted through the Tongan defence and beat six players before being dragged to the ground just short of the line. The line break led to Samoa scoring what proved to be the match-winning try.

From All Blacks to ‘Sport’s Blackest Day’: Simonsson family ready for more history