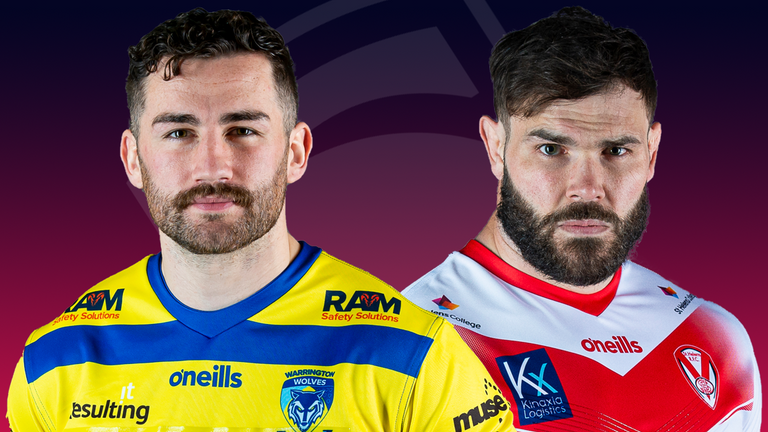 Find out what is being said and all of the team news ahead of Monday’s six Super League matches, including Castleford Tigers versus Wigan Warriors and Warrington Wolves against St Helens live on Sky Sports…

Richard Marshall is keeping a positive mindset as Salford aim to rebound from back-to-back losses when they host Hull FC in Monday’s opening game.

The Red Devils were beaten 42-14 at home to leaders Catalans Dragons in Round 21, which came on the back of them becoming the first team to be beaten in Super League this year by Leigh Centurions.

Nevertheless, head coach Marshall took plenty to work with from the defeat to Catalans, although he is eyeing a stronger defensive display from his team when the Black and Whites visit.

“The ‘team first’ mentality was there even though the scoreboard suggests differently,” Marshall said. “I actually thought it was one of our better attacking displays of the season, but defensively we got broken down through the middle too easily,”

The Red Devils have made one change to their initially-announced 21-man squad, with Oliver Roberts coming in for hooker Andy Ackers.

Hull travel to the AJ Bell Stadium aiming to return to winning ways after a 23-12 defeat to Castleford on Thursday evening.

📸 All set for a crucial clash at the AJ Bell Stadium tomorrow! 💪

Hull FC Academy trio Jude Ferreira, Aidan Burrell and Marcus Walker are all called into the squad, in place of Carlos Tuimavave, Jack Brown and Jamie Shaul who are all unavailable due to injury.

Willie Poching is aiming for Wakefield to keep building on the positive start they have made to his reign as interim head coach.

The 25-18 win away to Hull Kingston Rovers in Round 21 made it two wins in three matches since Poching was put in charge and the former Trinity player was delighted with what he saw from his team at Hull College Craven Park.

📋 SQUAD NEWS in association with @BalmersSales…

👇 Just two changes to the squad for Monday as Reece Lyne and Harry Bowes come in for the injured Matty Ashurst and Chris Green.#SLWakLee pic.twitter.com/iVx7ha6Y5F

“I am immensely proud,” Poching said. “I thought it was a real solid team performance. There was some great
work from our leaders.”

Wakefield will be without the injured Matty Ashurst and Chris Green, but England centre Reece Lyne is back in the squad along with Harry Bowes.

Leeds won 14-0 at Wigan on Wednesday night and as well as the 17 on duty at the DW Stadium, Richard Agar has included Sam Walters, Callum McLelland, Jarrod O’Connor and Jack Broadbent.

It is a big day for Richie Myler too as he is set to play his 350th career game. Myler has made 88 appearances for Leeds since joining the club in 2018 having previously made 50 appearances for Catalans.

Between 2010 and 2015 he played 145 games for Warrington along with 53 at Salford and two for Widnes at the start of his career in 2007. Internationally, Myler has 10 caps for England and one for England Knights.

Adrian Lam is under no illusions about the situation Wigan find themselves in as they head to the Mend-A-Hose Jungle for a clash with another Super League play-off hopeful.

Three defeats in a row, the most recent being last Wednesday’s loss to Leeds, have seen the teams below the fourth-placed Warriors claw their way closer to them on win percentage.

Head coach Lam knows last year’s League Leaders’ Shield winners and Grand Final runners-up cannot keep slipping up if they are to keep their title hopes alive, starting with the trip to Castleford.

“Myself, the players in the room and the coaches are the ones that find ourselves in this situation and we are the ones who can get us out,” Lam said. “We haven’t had much joy there over the last couple of years and it’s a tough place to play, but I think that’s part of this week’s challenge.”

Wigan are still without Sam Powell due to concussion, while Willie Isa remains suspended. However, Sam Halsall and Brad O’Neill both come into Lam’s 21-man squad for this match.

Castleford are without reigning Man of Steel Paul McShane due to an abdominal injury suffered in the win at Hull FC, but have been handed a huge boost with the earlier than expected return from injury of Michael Shenton.

🗣️ Daryl Powell on captain Michael Shenton being back available for selection!

Save and get your tickets ahead of matchday online now!
🎟️ https://t.co/ioOmPbvEfc#ReadyToRoar | #COYF

The Tigers captain was initially expected to be out for the rest of the season with a fractured cheekbone, but has been named in head coach Daryl Powell’s squad for the clash with Wigan as they aim to make it five wins in a row.

Steve McNamara is not thinking about Catalans claiming a maiden League Leaders’ Shield ahead of the Bank Holiday Monday visit of Leigh Centurions.

The match against Super League’s bottom side precedes a top-of-the-table showdown with St Helens on the opening day of Magic Weekend in Newcastle on Saturday.

But head coach McNamara is only focused on the encounter with Leigh at Stade Gilbert Brutus, knowing the Dragons cannot afford to get complacent.

“When it’s mathematically not possible to finish anywhere else, that’s when I’ll think about it,” McNamara said. “Obviously we are in a good position, but the likes of Saints and Warrington are running into form. We have just got to keep ticking the games off.”

Leigh interim head coach Kurt Haggerty includes Tom Nisbet, signed on a one-week loan from St Helens, in his 21-man squad as they bid to bounce back from a 42-14 defeat to the reigning champions.

Tony Smith wants to see an improved performance from Rovers at the John Smith’s Stadium after being disappointed with their showing in the defeat to Wakefield.

The loss to Trinity followed a narrow derby loss against Hull FC, denting Hull KR’s hopes of maintaining their place in the top six as the race for the play-offs intensifies.

“It’s not unusual after derbies that teams go flat and some of the rugby league goes flat,” Smith said. “We’ve got a game on Monday; it may not be spectacular-looking rugby league but we certainly want to get out there and show what we can do.”

Smith welcomes Matty Storton back into his 21-man squad for the match alongside Tom Whur, but Dean Hadley and Korbin Sims drop out through injury.

Huddersfield, who were beaten 26-6 at home to Warrington Wolves last time out, are boosted by the return of club captain Michael Lawrence following a spell out due to injury.

St Helens head coach Kristian Woolf believes the opportunity to increase the gap between his second-placed side and Warrington in third adds another dimension to the clash with the Wolves.

Woolf still has his sights set on a League Leaders’ Shield tilt, with only Catalans Dragons ahead of St Helens in the Betfred Super League table.

But he is well aware that Warrington sit just behind them and defeat at the Halliwell Jones Stadium would open the door further.

“We’d like to give ourselves a chance still at the League Leaders’ [Shield], and if we can’t quite get there then we certainly want to finish second and earn that ability to have a week off and to play at home, more importantly,” Woolf said. “So that certainly adds to the occasion – it’s a big game whenever we play Warrington.”

Jonny Lomax misses out after taking a knock against Leigh but Tommy Makinson, Mark Percival and James Bentley are named in the 21 man squad.

Blake Austin is sidelined for the home side due to a knock to his upper body, while Ben Currie is set to make his 200th Warrington appearance on Monday night.

⏪ @BenoCurrie with the decisive try last time out against Saints

⏩ The second-rower is set to make his 200th Club appearance tomorrow 🟡🔵 pic.twitter.com/jJhJzsUJDS