After all the fears expressed for the look and future of AFL football last year, you wouldn’t have blamed Steve Hocking and Gillon McLachlan for wearing a quiet smile at half-time between the Lions and Swans at the Gabba. It’s very early days in AFL season 2021. But the game looks transformed.

Either, possibly even both sides, was in a position to break 100 points. There had been 16 goals kicked, multiple lead changes, wild mood swings and thrilling highlights as the ball swung from end to end. As everyone tried to readjust to the traditional longer quarters, there was barely a chance to catch a breath. 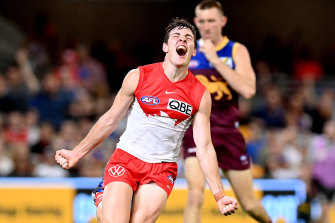 Errol Gulden of the Swans celebrates after kicking a goal.Credit:Getty Images

And in a sight to make all footy fans smile, there was Joey Daniher: moving well at his new club, kicking goals – but fading, to finish with 2.2 – getting reported in the first quarter (a careless shrug-off opponent Dane Rampe, unlikely to draw more than a fine) and giving the Lions a genuine target with now-second tall forward Eric Hipwood subdued.

But the result was a massive upset, the Swans torching the premiership-fancy Lions with a nine-goal third quarter to win by 31 points, Tom Papley kicking the visitors 41 points clear at the last change. Even in such a freewheeling game, there was no way the Lions were going to pull that back as drizzle started to tumble down.

The Swans were served by brilliant performances from Callum Mills, Isaac Heeney and Tom Papley. But their AFL debutants were the real revelation: Logan McDonald, last year’s No. 4 draft pick, academy product Braeden Campbell (No. 5) and especially Errol Gulden, also an academy selection (No. 32). 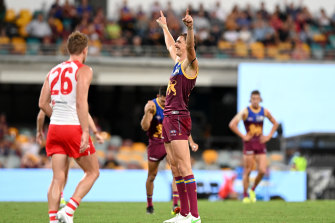 Joe Daniher is all smiles after scoring but it was not the Lions’ night.Credit:Getty Images

McDonald and Gulden kicked six goals between them, the latter also giving off a handful of others in a sensational debut. The Lions ended up being beaten on the inside and on the spread, with Brownlow medallist Lachie Neale well held and Charlie Cameron failing to hit the scoreboard.

The Lions bolted out of the gates, Zac Bailey receiving a slick McCluggage handball out of traffic to bang through the home side’s first within the first minute of play. Less than two minutes later, Bailey was on the board again, with the Swans unable to stop their opponents’ breakaway speed out the centre square.

Then Daniher nudged Rampe under an incoming ball and floated through his first goal in Brisbane colours – a mongrel snap, but it did enough to please a solid home crowd. After that, the goals dried up for the Lions, as the Swans dug in and dragged themselves back into the game.

Gulden was a real handful. He found Callum Mills early in the second quarter, with Mills putting the Swans in front for the first time. He then floated unopposed into space in a forward pocket and kicked his first from a tough angle, found more space on a lead for a second, then found Heeney with a surgical pass.

By now, Brisbane were in real trouble, and alarm bells really rung when Sam Wicks, in his eighth game, snapped the Swans’ seventh goal. Now it was the Lions’ turn to dig in. They needed a spark. They got it from the gifted Keidean “Kiddy” Coleman, whose tap over the top to Jarryd Lyons swung the game again.

The Lions kicked the next three, including one to Coleman on his “wrong” foot (you wouldn’t have guessed) and another to Daniher from a free kick; Daniher hoisting his arms to the crowd and his teammates. At the half-time break, both teams were locked on 52 points with eight goals each.

It was rip-roaring stuff. But the Swans owned the Lions in the third quarter, breaking the game apart with a frantic burst in which McDonald and Gulden again featured heavily, with Papley and veteran Luke Parker also raising their games. The kids, though? They’re better than alright, and they’ll make the Swans a lot of fun to watch this year.

Veterans could be squeezed out of the AFL