Geelong is a long way from the SCG, so too the club’s birthplace in South Melbourne, but if Sydney need a home away from home for the rest of this year then GMHBA Stadium is as good as any.

A game between teams sixth and seventh, separated only marginally by percentage, at a supposed neutral venue should produce a close game. 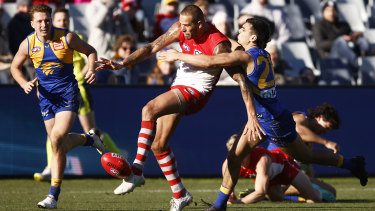 Lance Franklin takes a swing for goal against West Coast in Geelong.Credit:Getty

After two losses in a row, the Swans rediscovered their electrifying form from the first month of the season, clinically dismantling their overwhelmed opponent. The game was all but over midway through the second quarter when the Swans’ lead ballooned out to seven goals.

The win was their fourth from their past five games in Geelong since 2016, while it was the Eagles’ eighth defeat in a row at the venue, by an average of 69 points.

Though veterans Lance Franklin, Luke Parker and Dane Rampe all played well, in a mark of the progress the seemingly finals-bound Swans have made this season this victory was powered by the club’s future. 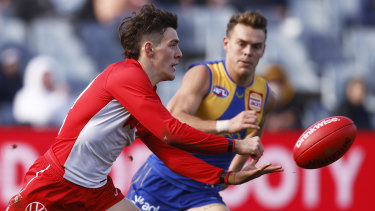 Errol Gulden handballs to get the Swans moving. Credit:Getty

High-class half-back Callum Mills continues to impress in his first season as a midfielder. Only Dom Sheed, who fought a lone hand in the Eagles’ midfield, had more than Mills’ 35 disposals, few of which were poorly used.

Errol Gulden, with his laser-like left boot, is already proving to be a weapon heading inside 50 in his debut campaign.

Fifth-gamer Joel Amartey, elevated from the rookie list this year, is proving to be another astute selection by list boss Kinnear Beatson. His two goals and 12 marks may appear modest but his opponent Jeremy McGovern had zero impact. 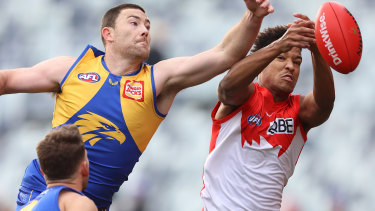 Another promising rookie Joel Amartey is challenged by Jeremy McGovern of the Eagles.Credit:Getty

The key to the Swans’ success was their willingness to get in the faces of the Eagles, who struggled to string together many meaningful chains of possessions due to the constant pressure they were under.

One team came with the attitude and application required for such an important game, the other was West Coast. 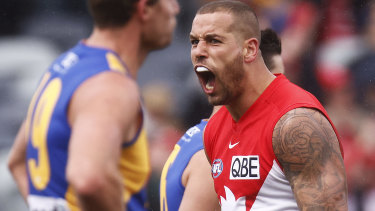 Thumped last week at home by the Western Bulldogs, they were again found wanting by another side in the top eight. Held scoreless in the second term, the vaunted Eagles forward line managed just three goals for the game.

Touted as a flag contender for periods this season, the Eagles are now fighting to keep their place in the eight. Failure to do so will likely raise queries as to whether the end of an era has come for this group.

Six years after his playing career was cut short, Kurt gets his chance to help the Blues