Home » Swans stay in Sydney, but club will be counting the cost

Sydney is frustrated by the late notice it has been given over its fixture switch, saying it stands to lose over $100,000 from its rescheduled home game against St Kilda.

The Swans were initially due to travel to Melbourne to play the Saints at Marvel Stadium on Saturday, starting 1.45 pm, but that game will now be held at the SCG in the afternoon slot as a result of Melbourne’s coronavirus outbreak. 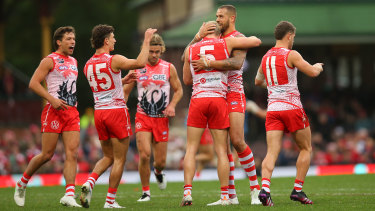 The Swans are back at the SCG this week after their game against St Kilda was transferred from Marvel Stadium.Credit:Getty

Clubs have been forced to become more flexible with the schedule due to the uncertainty created by the pandemic, but the Swans are unhappy the decision to flip fixtures with the Saints was not made earlier. The two clubs were due to meet again in round 21 at the SCG.

“It’s disappointing there has been a delay in selling tickets, and I hope the Sydney public really support the game and come out in force like the last time we played St Kilda in Sydney when we farewelled a few of our superstars,” Swans chairman Andrew Pridham said.

The Swans last faced the Saints at the SCG in the final round of the 2019 season when they sent premiership stars Jarrad McVeigh, Kieren Jack, Heath Grundy and Nick Smith out on a high in front of 33,722 fans. The game was also Lance Franklin’s 300th.

The Swans, whose financial performance is usually closely tied to their on-field fortunes, posted a $6.1 million loss last year when they were unable to host games with large crowds, and returned a loss of $509,000 in 2019.

The Swans, though, are better placed than some of their Melbourne-based rivals, some of whom have either had to relocate home games interstate or stage matches in closed stadiums.

The Western Bulldogs expected to lose $300,000 after crowds were not allowed to watch their top-of-the-table clash against Melbourne at Marvel Stadium last week, the Herald and The Age reported last week.

Meanwhile, Swans star Callum Mills has accepted a $1500 fine for striking Carlton’s Liam Stocker in the groin, while Sam Wicks also chose not to contest his $1000 fine for misconduct against Jacob Weitering.

Martyn Williams: Wales games behind closed doors would be ‘surreal’