A hat-trick to Briton Nikora has helped Cronulla to a 38-16 defeat of Newcastle that confirmed a first NRL top-two finish for the Sharks since 1999.

The Sharks will now host North Queensland in a qualifying final next weekend at PointsBet Stadium, where they are on a five-game winning streak against the third-placed Cowboys.

Sunday’s win at McDonald Jones Stadium was Cronulla’s sixth in a row but looks to have come at a cost.

A hip-drop tackle from Mat Croker left State of Origin representative Siosifa Talakai with an apparent ankle injury in the final two minutes of play.

Both men left the field; Croker to the sin bin and Talakai to the casualty ward.

Newcastle were determined to finish their disappointing season on a positive note and made the error-prone Sharks work hard to confirm their home qualifying final.

But, just as they did against Canberra in their last home game, the initially competitive Knights fell away the further the game went on and were unable to withstand repeated pressure close to the line.

When Cronulla scored against the run of play through Luke Metcalf, who pounced on an Adam Clune kick and streaked 95 metres, the Knights’ spirits could well have broken.

But the home side replied with a long-range try of their own; Dominic Young picking off a wayward Nicho Hynes pass to lock the game up at half-time. 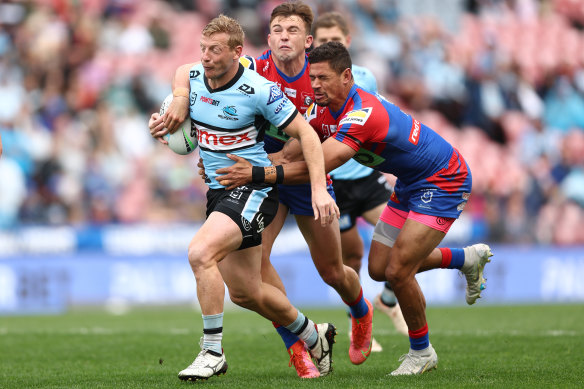 As rain teemed down in the Hunter, the Sharks lifted their intensity and scored within 43 seconds of the restart in the second half.

Cronulla regained possession from a short kick-off and rolled forward to the line, where second-rower Nikora grabbed his second try.

The Sharks wrestled territory back as the second 40 went on and, when Nikora completed his first NRL hat-trick, they had built up an unassailable lead.

For all their effort, the Knights now finish the season having lost as many games at home as ever before.

Newcastle have lost 10 of their 12 games at McDonald Jones Stadium, more than in their 2005, 2015 and 2017 wooden spoon seasons, and on seven occasions suffered defeat at home by 20 points or more.

Italy vs England live stream: How to watch Six Nations online and on TV today