Cronulla’s Siosifa Talakai is set to be rubbed out of Saturday’s semi-final clash with South Sydney while Campbell Graham will require a pain killing injection to play.

Sources confirmed afterwards that the NSW Origin centre will succumb to the injuries after Talakai rehabbed an ankle issue around the clock to play in last week’s epic 93-minute loss to North Queensland.

Former rugby sevens flyer Lachlan Miller is the likely replacement on Cronulla’s right wing as Connor Tracey shifts across the field to cover for Talakai’s absence.

Several of the Sharks biggest names, including Nicho Hynes and Dale Finucane, were kept on light, contact-free training duties this week as the club managed their workloads.

Rabbitohs star Graham has been kept under similar wraps this week as he manages a shoulder injury, training for part of Friday’s captain’s run in a rehab bib. 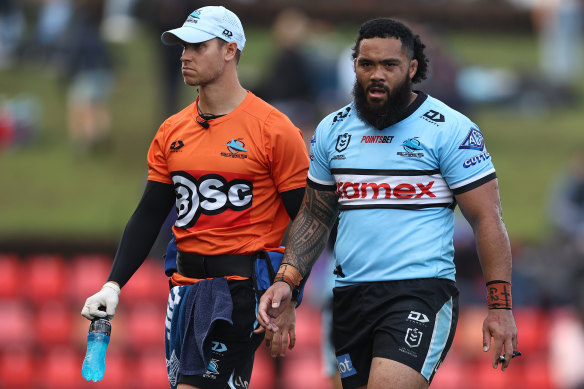 Siosifa Talakai’s season could be over following news the rampaging back-rower could miss the clash with Souths.Credit:Getty

Coach Jason Demetriou insisted, however that Graham, who has been sidelined this year by concussion and a facial fracture, is in no doubt for Saturday’s clash at a sold-out Allianz Stadium.

“He’s fine, he’ll get a needle tomorrow but he’s tough as nails,” Demetriou said on Friday. “He’ll be right to go tomorrow night.”

Talakai’s withdrawal comes as Cronulla knocked back the chance to get an early look at the rebuilt venue. Souths have at least had two dress-rehearsals at the ground they one day want to call home, facing the Sydney Roosters there twice in the past fortnight.

Cronulla, meanwhile, are technically the home team but are yet to set foot inside Sydney’s newest ground.

They were given the option to complete their captain’s run at Allianz on Friday, but Fitzgibbon opted to prioritise routine over the need to familiarise with the new ground.

“We wanted to keep consistency of prep,” Fitzgibbon said.

“Obviously not to work your way over there through the mid-morning traffic, hang out, make a full day of it.

“We’ll get to experience it first-hand on Saturday night. The guys are looking forward to that.”

The NRL is officially broken and everyone knows why