Teal clad teams are making headlines Australia wide in the lead up to the election, and the AFL’s teal-hued side Port Adelaide have been making plenty of noise themselves over the last month as they bounce back from their horror start to 2022.

Their 69-point victory, 17.13 (115) to 6.10 (46), over a callow North Melbourne at Tasmania’s Blundstone Arena makes it four wins on the spin for Ken Hinkley’s team and will give them further hope that they can force their way into finals reckoning as their season-long campaign, compared to the Canberra-focused one which ends in seven days, progressively grinds into gear.

Hinkley suggested, after they slumped to a 0-5 record following a narrow loss to Carlton, that there was nothing stopping them winning their next five in a row, and his players are clearly taking him at his word. Having kept Port near the top of the ladder for most of the past decade, the coach can certainly run on his record.

Port stamped their authority on the game early and although North tried hard for much of the contest the gulf in class, experience and execution was all too evident.

For David Noble and his North side the nightmare of 2022 continues. North have now lost seven games on the trot and their defeats continue to see their already poor percentage fall even more. 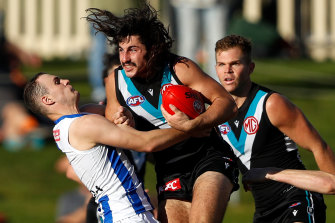 Port got off to the sort of start they would have dreamed of, outscoring a hapless North by six goals to one in an opening term where Mitch Georgiades goaled twice, Todd Marshall (two goals) continued his strong scoring record and Darcy Byrne-Jones and Ollie Wines, captaining the side in the absence of Tom Jonas, kicked a goal apiece.

North’s solitary strike came from Nick Larkey – his 100th career goal – and things looked grim at the first change for the Kangaroos, who looked as though they could be over-run after finishing on the wrong end of a six goals to one quarter which left them trailing by 32 points.

North fans might be resigned to the fate of their team this season as they continue a painful rebuild, but the least they want to see is real effort and commitment.

They did so in the second quarter when, if not for some wayward kicking and frustrating skill errors, they could have closed the gap and given Port something to think about.

Goals to Cameron Zurhaar and Tarryn Thomas were scant reward for the effort made.

Jeremy Finlayson was Port’s main man in this quarter, bagging a brace and chalking up a milestone 100 career goals in the process. The vast majority, 90, of them came when he was with his first club, Greater Western Sydney.

In the end there was little change – Port’s lead had been trimmed from 32 points to 31 at the long break.

KEEP ON KEEPING ON

The phrase accurately sums up the efforts of both teams in the second half: North kept up their effort and tried hard, Port, rather like a bigger fighter who can use his reach to keep a plucky opponent at bay, did enough to keep their rivals at a respectable distance whenever they threatened a shock revival.

Zurhaar goalled for North after a smart handpass from Paul Curtis to reduce the deficit to 27 points midway through the third term, but a poor clearance from Lachie Young meant Sam Powell Pepper had an easy chance to pull the goal back.

Zurhaar dribbled one through near the end of the quarter but North could only look on in frustration as Larkey fluffed a straightforward chance to narrow the gap further just before the third quarter ended.

But the dam could not hold, and Port boosted their percentage and ensured North’s nightmare continued by piling on seven goals to one in the final quarter.