Sydney Roosters star James Tedesco showed why he is still the best full-back in the game with a game-saving tackle as his club edged past Melbourne Storm at AAMI Park on Friday night.

The 18-14 win was the seventh-straight for the Roosters and came on an emotional night in Melbourne as 25,308 fans came to pay tribute to departing stalwarts Jesse Bromwich, Kenny Bromwich and Felise Kaufusi but saw the home side make 10 errors in the first 62 minutes, which robbed them of any chance to take the victory. 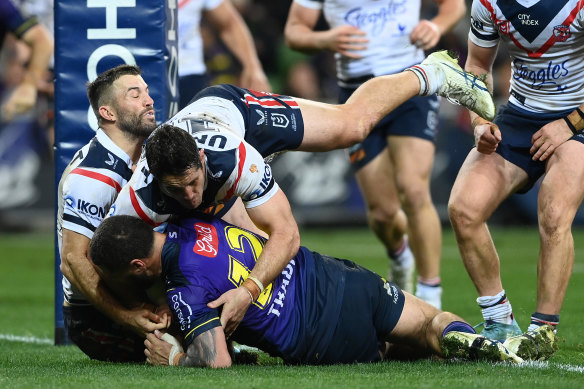 Kenny Bromwich of the Storm is held up over the try line by James Tedesco and Nat Butcher of the Roosters.Credit:Getty Images

Kenny Bromwich looked certain to be the hero with just minutes to go as he barged over the line but Tedesco wedged himself underneath the second-rower and stopped him from a certain match-winner.

But the win could come at a heavy cost for the Roosters, with Victor Radley knocked out late in the match and Lindsay Collins going on report for a low tackle on the legs of Tom Eisenhuth, which resulted in the Storm forward being carried off with a knee injury.

The Storm’s top-four hopes will now rest on winning their final-round clash with Parramatta Eels in Sydney on Thursday night, while the Roosters are the form team in the competition but can’t go any higher than sixth.

The Roosters left nothing to chance early, taking a penalty goal from their first penalty and a 2-0 lead. But they were lucky to not be trailing soon after as Justin Olam was unable to get the ball down for a try after chasing down Harry Grant’s grubber kick.

Sydney responded with a try just after that play with a smart move on their left edge as they broke the line and had Luke Keary and Drew Hutchison team up to find winger Daniel Tupou who scored in the corner.

Both sides lost key players to injury, with Tupou limping off with what appeared to be a groin injury. He was soon followed by Storm captain Jesse Bromwich, who was sent for a head injury assessment although he passed it and returned to the field.

The Storm couldn’t get their hands on the ball and the Roosters wore them down, drawing a six-again call and moving the ball from the left side to the right before Keary saw winger Joseph Manu unmarked and put up a kick which he chased down and scored for a 14-0 lead after 20 minutes.

Roosters prop Jared Waerea-Hargreaves and Storm prop Nelson Asofa-Solomona were having a running battle from the opening kick off and emotions boiled twice on 25 minutes, with the referee warning both captains to control their sides, only for Asofa-Solomona to run at his fellow Kiwi forward on the very next play. 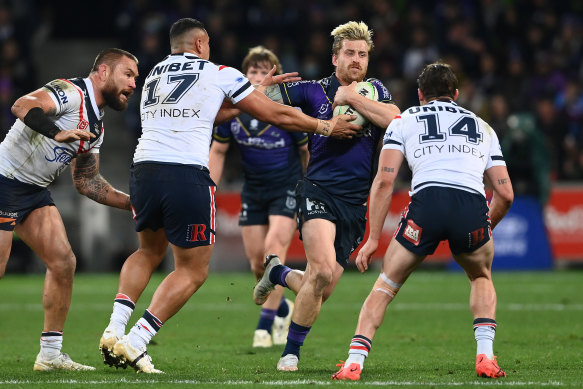 After appearing to tackle him fairly, Waerea-Hargreaves appeared to headbutt or lead with his head as his Storm opponent fell to ground. He was sent to the sin bin for 10 minutes and left the field to a sea of boos.

The Roosters did well to burn some time at the attacking end, but the Storm eventually seized their moment, moving to the right with Cameron Munster, Jahrome Hughes and Kaufusi, where centre Marion Seve threw a perfect pass to Xavier Coates who scored in the right corner.

Hughes was tackled high just before the half-time siren and Nick Meaney converted the penalty to make it 14-8 at half-time.

The Roosters should have gone further ahead as Joseph Suaalii sprinted towards the right corner but Hughes pulled him into a textbook wrap-up tackle so he couldn’t put the ball down.

But yet another handling error from Melbourne gave the ball back to the Roosters and they again attacked towards Suaalii’s wing, this time he went low to the line and Coates couldn’t hold him up.

The Storm looked in trouble after their 10th handling error saw them lose the ball just 20 metres from the line, but they found a way to win it back and Hughes broke through the middle of the field to set up a play that eventually saw Meaney force his way over to cut the lead to 18-14 with 13 minutes to go.

Jesse Bromwich and Tui Kamikamica came up with some crucial tackles to force turnovers and give the Storm a last chance to take the lead but Tedesco made sure his side would win the day.

‘Hard not to take it personally’: Treloar opens up on brutal trade