Josh Kennedy has graciously accepted defeat in his long-shot attempt at overcoming injury in time to play a part in Sydney’s AFL finals push, but hasn’t ruled out a return to footy – or the Swans – in an off-field capacity.

Kennedy announced last month that he would retire at the end of the season but left the door ajar to add to his 290 games this month, if he was able to recover from his hamstring troubles and earn a spot back in coach John Longmire’s 22.

But that recurring injury, last aggravated in a VFL match early last month, has turned out to be career-ending, with the 34-year-old confirming to the Herald and The Age what he and the rest of the AFL universe probably knew deep down a while back.

“That’s it for me,” said Kennedy, who is still troubled by his hamstring to the point where he can’t stand still or sit for too long without significant soreness.

“It’s bittersweet because I’m not playing. But at the same time it’s really, really exciting for the footy club. I’m so much a part of that.

“I’m an amazing supporter of the young players and the team and I feel very much a part of it, regardless of whether I’m playing or not. 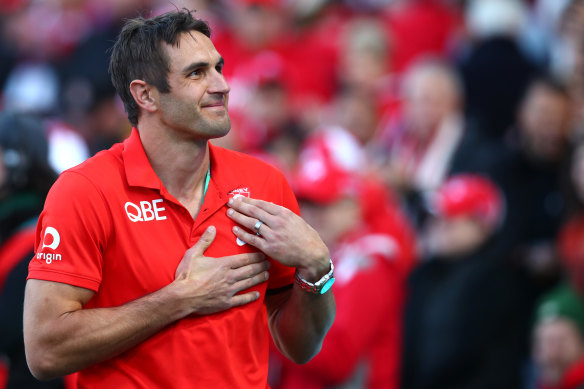 Josh Kennedy has played his last game for the Swans.Credit:AFL Photos

“It’s such an exciting time, having experienced it earlier in my care, playing in grand finals and prelim finals, and having to work really hard to get the team back now to where we’re competing again, and in a position where we believe we can win it, is something pretty special, and to see a lot of guys go through it for the first time is really rewarding.”

A co-captain of the Swans from 2017 until the end of last season, Kennedy will still be heavily involved in Saturday’s preliminary final against Collingwood – and the grand final the following week, if they’re successful – just as he has been in recent weeks as an auxiliary member of Longmire’s coaching staff, stationed on the bench and with a headset strapped on.

“However John wants to use me, whether that’s on the bench or up in the coach’s box. Obviously working much closer with the midfield and just providing an extra layer of support and leadership as well, being able to be solely focused on the general team aspects.

“Having not long ago been playing, it is a balance between being focused on what you have to do at any given time and then the team, but being one step removed, it’s all about the team, and I can help the leaders in that regard too, in terms of what triggers need to be pulled to the course of the game.”

Kennedy’s last game at the top level was back in round 10, in a 15-point defeat to Carlton. The Swans have only lost twice since, and are riding an eight-game winning streak into their showdown with the Pies, who they beat at the SCG only a few weeks ago in a high-stakes, finals-like clash before a packed crowd.

Kennedy was part of the Sydney team that won the 2012 premiership and may yet have a hand in another flag a decade on – and potentially more in the future, with the classy midfielder open to a switch to coaching.

“I think beyond this year, I’m really excited for what is out there. I’d never say never,” he said.

“It’s something that I’m looking forward to sort of stepping back, taking some time to reflect, and then project about where I’m going to get the most passion and add the most value in the years to come.

“I’m not sure the future is a little bit uncertain, but I’m excited for the opportunities that are out there.”