Home » The $8m that bought Queensland an extra Origin game

The NRL abandoned plans to play Origin I at a neutral venue thanks to an $8 million bid from the Queensland Government to stage next Wednesday’s blockbuster in Townsville.

Brad Fittler’s Blues will now be forced to play the first two games of this year’s series north of the border. 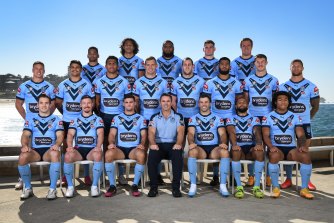 The NSW squad at their Coogee base on Monday.Credit:NRL Photos

Palaszczuk’s NSW counterpart Gladys Berejiklian made a late bid to have the game played at Bankwest Stadium but could not trump the Queensland cash.

The NRL have been approached for comment about the Queensland bid price.

NSWRL boss Dave Trodden was disappointed but did his best to contain his emotions when he told the Herald on Monday afternoon: “The field up there will be the same size as the fields everywhere else, and I’ve got a total belief in our team to meet whatever challenges are put in front of them, and this is just another challenge.

“We’re confident we’ll meet them up there and be successful.”

The Townsville decision also now poses a risk to the NSWRL bottom line with the possibility of game three at Stadium Australia becoming a dead-rubber. There is no chance of 80,000 fans packing the Sydney Olympic Park venue if the Maroons have already stitched up their second straight series.

“But we don’t expect it to be a dead-rubber,” Trodden said.

QRL chairman Bruce Hatcher was naturally delighted with the decision and while he was not aware of the final figure, confirmed $8m was normally the money required to host such a big event like Origin.

“If you went back to the old system where one state gets to host two games, this would turn out to be Queensland’s year,” Hatcher said.

“We’re very cooperative with this new approach to have the first two games in Queensland.

“We’re still the underdogs. NSW have more than 50 per cent of the talent to choose from, so they’re never underdogs.”

When asked how he would have felt if NSW hosted the first two Origin games, Hatcher said: “I don’t like dealing in probabilities or hypotheticals.”

The ARL Commission and the Victorian Government agreed to abandon next Wednesday’s game, with Melbourne to now host Origin in 2024 and 2026.

NRL chief executive Andrew Abdo said the move to Townsville was not just a financial decision but was also made to limit the risk of a COVID-19 outbreak and as an opportunity to show off the new stadium.

“Having to cancel the game, and refund fans and deal with the logistical challenges just a week out from the game in Melbourne, meant that the Commission needed to think of the best interests of the game and limit the financial damage as much as possible.”

Fittler told the Herald over the weekend: “For the last three years the team who has won the ‘away’ [neutral] game has won the series. Every team has won their home games, so now we’re talking about possibly playing two home games for Queensland.

“I guess it could be a good year to break a record or hoodoo.”