All of a sudden, Luke Breust is the last man standing at Hawthorn.

Ten of the 32-year-old’s premiership teammates who played in the era-ending 2016 second semi-final loss to the Western Bulldogs will have played for another club by the time Breust’s career at the Hawks ends.

But Breust has stuck around during the ongoing, strategic list purge, with players traded for draft picks under Mitchell, and not ready-made players as was the case under Clarkson. 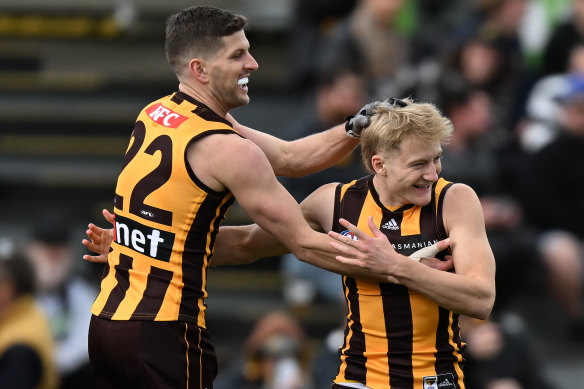 Since Breust signed on to stay at Hawthorn until 2024, Tom Mitchell and Jaeger O’Meara also joined other clubs. Former skipper Ben McEvoy retired.

But when the coach indicated just before last season ended that he wanted Breust around for longer, the decision to remain was “a no-brainer”.

“Being a one-club player and leaving a legacy here has certainly been my priority, and it’s what I wanted to do and, luckily, by signing the extension, I can,” Breust said.

The modest, triple-premiership, goal-scoring machine has completed a commerce degree, a renovation and is gaining work experience at PMY Group, which manages technology solutions for major events and venues. His wife Anthea is entrenched in a job she likes at Caulfield Grammar.

“I had all these different areas of my life that were lined up and sort of set,” Breust said. “I was working towards what ultimately would be a transition out of the game. The clearest way out and the easier transition was going to be to stay at Hawthorn.”

He half-jokes that the biggest shift he might have to make after staying is to obtain a future golf membership so that he can play with his younger teammates at different courses, as few of them, unlike his premiership teammates, hold membership at Huntingdale Golf Club.

He had let Gunston know he’d love him to hang around too but did not push the issue with his great mate and on-field ally as he respected his motivation for the move. 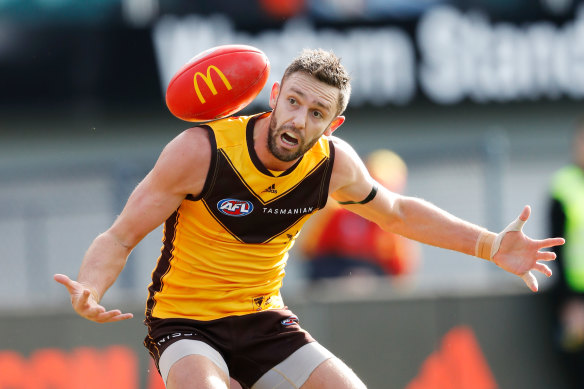 Jack Gunston will be missed at the Hawks.Credit:Getty Images

“[Jack leaving] might be good for me if you look at it on the positive side. The boys give me stick that every time I kick inside 50 the only person I look for is [Jack] so I might open my eyes a little bit and be able to hit someone else,” Breust said. “It forces me to build more relationships and get to know some of these other guys on a bit of a deeper level. I’ll hopefully continue to have a significant on-field contribution as well. That’s probably first and foremost.”

Having quietly kicked 40 goals again in 2022, the 11th time in 12 seasons he has kicked at least 30 goals, Breust remains a key cog in a reshaped forward line and would have had no shortage of options if he wanted a trade.

The veteran is not blind to what the list changes mean. He knows they will create challenges with more than 1000 games of experience disappearing, but he expects teammates to emerge from the shadows.

“The biggest positive for me from last year was the opening up of the leadership across the board and giving guys a chance to step up,” Breust said.

“It didn’t always happen, so there is significant room for improvement. There were meetings where it was really quiet or guys wouldn’t speak, and it would take a ‘Macca’ [McEvoy] or a Gunston or someone to come over the top or just give them a bit of a prod.

“But at the same time more often than not during the year guys were starting to step up. It’s not about confrontation. It’s more speaking your mind saying someone could do a bit better there or, ‘Have you thought about this?’” 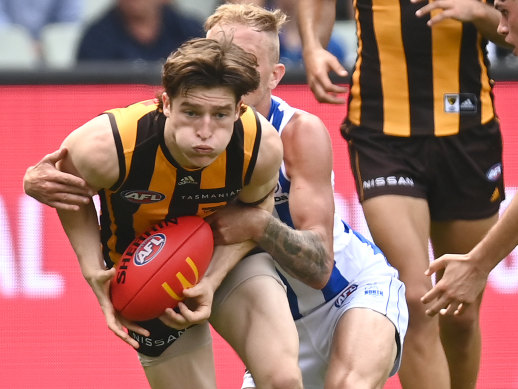 Josh Ward is one of the talented Hawks learning the ropes.Credit:Getty

Shifting the momentum of games and rebounding from mistakes can be tough for youngsters, but Breust says teaching that “skill set” will be a priority next season.

The talent is obvious to Breust, but only an appetite for hard work will allow that to flourish.

“The biggest thing I look for is your work ethic and your desire because if you don’t have that you may as well not even start,” he said.

Breust had to do a long apprenticeship, added to the rookie list in December 2008 but making his AFL debut in 2011. He did not feel comfortable at AFL level until he had played about 30 games.

“It wasn’t until my third pre-season where I really started to feel like I could have a significant impact on training. I think that’s another step as well,” Breust said.

“If you can’t dominate a drill or if it’s two v two or three v three inside 50 and there is space everywhere, and you can’t dominate and get shots on goal and have a significant impact then how are you meant to have impact when it’s six v six or 10 v 10 down there when it is a proper game?

“They are the little steps that I try and tell these young guys about. You might pick one drill for the day and think this drill plays to my strengths, this is where I should be good. I want to be trying to dominate this. If you aren’t, then you probably know that you’re still a significant way away from doing that within a game.”

The young Hawks are lucky to have Breust as a guide. Not only is he an outstanding player, he is humble and able to explain like a master craftsman how his own game works and how to get an edge on his opponent in one-on-ones.

“For me, it’s always been about scoreboard impact and assists and what I can do for the side in that regard. The only reason I would get high up the ground is to beat my opponent back and use my reaction and speed to get back, which also makes it easier to crumb,” Breust said. “I know exactly what positions I need to be in. They are familiar situations, it’s really muscle memory.”

He stood instinctively in the cafe to show how he reads the kick, so he can move from being in front of his opponent to being behind him instantly. It was simple yet engrossing. 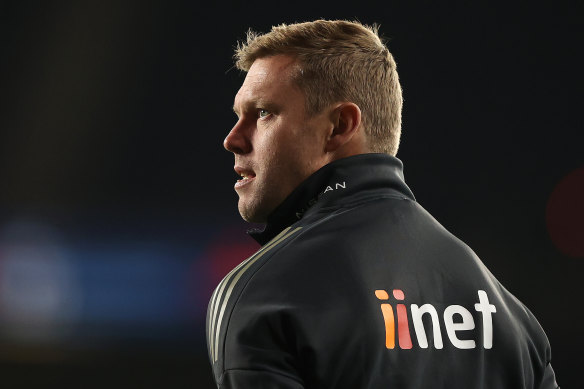 Hawthorn have made brave list decisions in the hope of accelerating their rebuild.Credit:Getty

The only time the animation about what lies ahead at the Hawks left his face was when the Hawthorn review into cultural safety came up. It is an emotional topic for him, having lived with the Burts (Jason Burt was the club’s player development manager at the time, and Burt has denied the allegations made in the review) when he first arrived in Melbourne and Breust feels empathy for all parties, former players, their partners and coaches.

“It’s a sensitive topic. I just hope every party can have their say, and we let the investigation play out,” Breust said.

He’s a true Hawk Breust, respected across the competition and hoping to lend what experience he has to the next generation, a new crop of 10 in Lloyd Meek, Karl Amon, Cooper Stephens, Fergus Greene, Cameron McKenzie, Josh Weddle, Bailey McDonald, Jack O’Sullivan, Henry Hustwaite and Josh Bennetts joining the Hawks post-season.

Breust will be there to see who among the current crop of players will step up to enter the top 100 then the top 50 then the top echelon in the competition to push Hawthorn back into contention.

“What I want to see is the work ethic and desire to get better,” Breust said.

‘No respect on the field’: Latrell stands tall in Rabbitohs rumble with Origin foe Gagai