Mitieli Vulikijapani has been anticipating a call-up to peacekeeping duties in Ukraine all year but his immediate focus is marking Kangaroos speedster Josh Addo-Carr at the World Cup after being drafted into the Fiji squad.

Vulikijapani, 28, was a late addition to the side due to injury but the Hull FC flyer has impressed enough to claim the right-wing spot for the Bati’s tournament opener in Leeds on Saturday (Sunday AEDT).

He came to rugby league via Fiji’s armed forces and playing sevens rugby in the island nation. His cousin encouraged him to join him in the UK, where Vulikijapani joined the 47th Regiment Royal Artillery as a gunner.

Russia’s invasion of Ukraine means Vulikijapani could be called into action as a peacekeeper, as per the terms of his release to play professional rugby league with Hull and now Fiji.

“This is a dream come true to be playing in a World Cup and playing for Fiji,” Vulikijapani told the Herald. 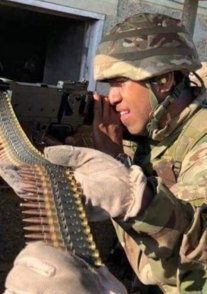 Fiji’s Mitieli Vulikijapani during a training exercise with the British Army.Credit:Tik Tok

“I only joined the army in 2017, so the last World Cup I was watching these boys at home in the village.

“The army’s still my first priority, that’s my job as a gunner, I’m in charge of the drone and I’m still serving at Larkhill in Wiltshire.

“So if they call and say they need me, I have to go to the Ukraine – and I want to go.

“The message has been it’s definitely on the cards and that’s the agreement with Hull FC too, that I’ll go back and do my job for my country.

“It’s not scary. I signed up for it, it’s my job and it’s given me the opportunity to travel and play this sport. I’m playing for Fiji because of my army duties.” 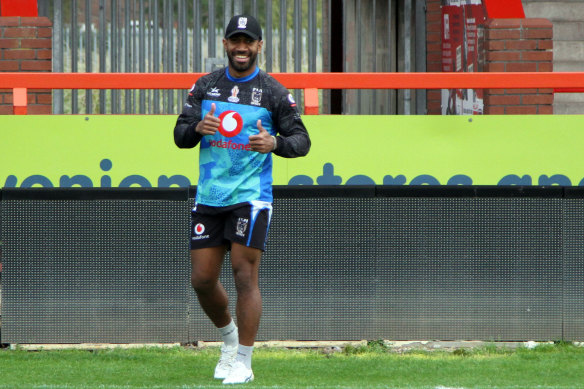 Mitieli Vulikijapani enjoying training before taking on the Kangaroos.Credit:Joel Cama

Vulikijapani has travelled extensively because of his army duties and played sevens at British sides Harlequins and Saracens alongside countryman and fellow private Ratu Naulago.

A trial with Hull FC took him to the Super League, with his try scoring and powerful carries establishing him as a fan favourite.

His commitment to the army will likely outlast his rugby league career, having signed a 12-year contract through to 2029.

It’s an incredible journey considering he had barely played the 13-man game when he left Fiji, and watched teammates Viliame Kikau, Api Koroisau and Tui Kamikamica from home when they made the World Cup semi-finals five years ago.

“This is massive for me and my family,” he said.

“To be playing a team like Australia, it’s just crazy. I think my family’s got half the village getting around to our house to watch the game at 6am. They’re all very excited and so am I.”

Billy the man: Slater back to haunt Blues in epic Origin upset