Harry Taylor can’t put his finger on why. He is a reflective personality type so it is not that he has not contemplated why Geelong have been less successful in finals in the past nine years than they have been during the seasons.

He just thinks the premise of the question is wrong. It is like waving away smoke to look for fire. 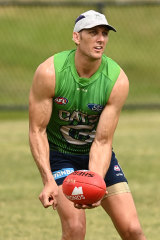 “So I don’t read anything into it. You have personnel change every year. Your opponents are different every year.

“That will be the easy headline if we lose [the question of finals form and the end of an era] but we never really refer to our team in one point in time as an era. Scotty says all the time we are on a journey as a team rather than an end point and a start point. I have found that refreshing.

“Other teams talk about rebuilds or draft strategies but we don't, Scotty talks about the team as a constant. It’s never been a particular era starting or stopping.”

Harry Taylor was the 1013th player to debut for Geelong. When Ben Jarvis played for the Cats earlier this year he became the 1091st. A total of 78 players have come into the team since Taylor started.

This is the stat that makes Harry think the idea of eras is overstated. Eras are not one thing, they are an organic, evolving beast. Philosophically it is an interesting post-modern sort of thought, though football thinking tends not to be so post-modern.

The typical approach is to look at last week’s Geelong team and recognise that it was the oldest team to play a senior match in the AFL era. Older even than Hawthorn’s team from this year that had the average-distorting Shaun Burgoyne in it. The next oldest team? Geelong’s in 2011. Things went pretty well for the Geelong in 2011 so age is not necessarily a bad thing.

'Other teams talk about rebuilds or draft strategies but we don't, Scotty talks about the team as a constant.'

Geelong’s team last week was the second-oldest team in the history of the VFL/AFL, behind Collingwood’s team of 1919, a team filled with servicemen returned from WW1.

Is the age of the team relevant to a recent finals record? Not really. Old teams win finals too, as 2011 proved.

It points more to the fact that Geelong’s management of their playing list in this period since 2011 has coincided with the arrival of free agency and they have embraced a strategy to access elite talent through trading and free agency more than the draft in this period given their finals finishes meant they haven't had early draft picks.

They could have traded out players to secure early draft picks but they have looked to trades and free agency instead – bringing in Patty Dangerfield, Zach Tuohy, Jack Steven, Gary Rohan, Rhys Stanley, Luke Dahlhaus and a homecoming Gary Ablett. They have made excellent use of later draft picks for Tim Kelly, Tom Stewart and Sam Menegola.

So what Geelong have done is utilise these tools to keep a team of stars intact and build others around them. They have been able to defy football’s gravity in a way that their contemporaries of the early part of the decade Hawthorn and Sydney have not.

Putting aside the philosophical argument over eras, the numbers point to a conclusion that they have built an older team that is very competitive but has not been the best team in any one year. A pertinent – and fair to Geelong – question of their finals record would be in how many finals they have lost have they entered that final the clear favourites to win?

Their home ground raises two issues. Was part of the recruiting and list philosophy predicated on remaining competitive and relevant to be financially buttressed to pay off the new grandstands being built?

Former club insiders admit this gives them an extra win or two a year and a slightly higher ladder position. So a few of those years they were not quite as good as their ladder position suggested.

Why would that be relevant this year when they have not played at home? Well, everything about this year is upended.

“They have too many blokes over 30, and last week they were pretty good but they did look slow,” said a senior football person.

“They’ll look at that at the end of the year but they have three picks in the first round this year because of the Tim Kelly picks so they will replenish pretty quickly.”

A loss this week would raise a question of the value of trading back Ablett into an ageing team. But as a former club insider said: “What they hell could they do? When Gary Ablett says he wants to come to you, you don’t say no.”

Taylor ignores these sorts of issues as asking the wrong question. He reminds himself of the simplicity of the game and tries to shutter out the distracting noise that only blurs thinking.

“You could worry about the fact we could go out and lose this week and people would say all these things or on the flip side think we have an opportunity to go out on the Gabba against one of the biggest teams, Collingwood, in front of a big crowd and millions more on TV and play a game we love.

‘Stressful’: Hiku opens up on decision to leave Warriors and return to NZ