Home » Rugby » The good, bad and potentially ugly: Five storylines to follow in round one

Yes, we know predicting this sort of stuff is a folly. Anything can happen between round one and October, as we learned last season, and a few key injuries can torpedo a side’s claims overnight. Yet on the face of things, the Thursday night opener between Melbourne and South Sydney could be a sign of things to come deep into the finals.

Melbourne are likely to be short-sold once again this season with Cameron Smith departing, yet you could easily make a case that brilliant young hooker Harry Grant, who will sadly be missing on Thursday, could give them a fresh burst of energy and intent. The Rabbitohs, on the other hand, look every bit the real deal. If they can keep Latrell Mitchell, Cody Walker and Adam Reynolds healthy, they will be extremely hard to beat in 2021. Both teams trialled strongly and will be ready to go from the first whistle. 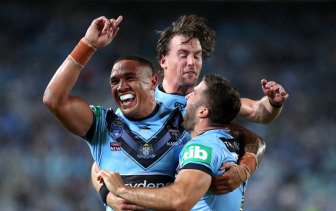 Tyson Frizell has been a mainstay for NSW. Can he add another dimension to the Knights?Credit:Getty

Are the lowly sides as bad as everything thinks?

There’s been as much talk about wooden spoon prospects as there has about premiers, with the Broncos, St George-Illawarra, Wests Tigers and the Bulldogs foremost among the discussions. The 2021 season truly looks like a battle of the haves against the have-nots and the opening rounds of the competition could be instructive, although the Broncos did win their first two games last season before tumbling off a cliff. Brisbane get the Eels on Friday might, the Bulldogs get the Knights, the Tigers have to travel to Canberra while the Dragons face off against the Sharks. It will be up to them to prove the doubters wrong.

Manly must find a way without Tom Trbojevic

Few sides lose their mojo like Manly without their star fullback. He will be missing for the opening rounds after yet another hamstring issue but don’t expect their round one foes the Roosters to be feeling sorry for the Sea Eagles. Manly are rank outsiders to win in week one and things might stay that way until Trbojevic gets back on the park for an extended run. They finished well down the ladder in 2020 and won’t climb up it unless they can find a workable Plan B when their best strike weapon is absent. He should be back from round four but there are few guarantees as to his durability at the moment. 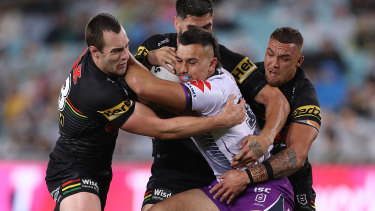 He already has a premiership, now Tino Fa’asuamaleaui is ready to add some more starch to the middle of the Titans.Credit:Getty

The Titans have no excuses and aren’t looking for any

That’s the best thing about Justin Holbrook; he’s happy for his team to play with the weight of expectation and knows they need to handle it if they are to pull themselves up into the finals. They start their show against the Warriors at Central Coast Stadium and have been the biggest movers in the off-season, adding David Fifita and Tino Fa’asuamaleaui to an already improving roster. They have drawn reasonably well over the first three rounds and won’t want to be leaving wins on the table before they run into title heavyweights like the Raiders.