On the day of the Big Freeze, Collingwood poured another bucket of cold water on Melbourne’s back-to-back premiership aspirations. After three successive losses, they are no longer on top of the ladder and now officially in winter hibernation.

Conversely, this was the Magpies’ fourth win in a row and their fourth over a contender this season. From 20 points behind early in the third quarter, they kicked nine goals-to-one to run over the Dees. In truth, considering the goals they missed and gave away, they might, and should have, won by more. 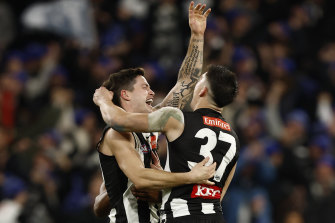 As the Pies ease into their bye, maybe it is time for a reappraisal. At very least Craig McRae is in the running for coach-of-the-season. So relaxed is he in what is one of footy’s hottest seats that late in the last quarter, he passed a wink to a boundary reporter of his acquaintance. There is a bit of Jack Ginivan in him after all.

Pre-game, McRae had said that, considering where these clubs had come from respectively this season, this was a free hit for the Pies. If ever there was a footy wild card, it was Collingwood’s enigmatic American Mason Cox. 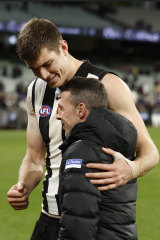 As the Dees threatened to run away with the game in the third quarter, he restored the Pies to the contest with a series of towering marks, a running goal and an assist. He was Max Gawn in a Collingwood jumper. His dander up, he ended the match with the most disposals in his unique career. The Collingwood cheer squad reprised their “USA, USA” chant from 2018.

For the Demons, bad turns to worse. Coach Simon Goodwin had said that after a fallow fortnight on the field and a turbulent week off it, this was a chance to re-set their game and reassert their culture. But the Magpies’ 2022 style does not leave much breathing room, nor allow for think music. As for culture, it was a case of if and not May.

Captain and heartbeat Max Gawn was plainly labouring from early in the second quarter and debutant Daniel Turner’s big day came to an abrupt end when he was put through concussion protocols and had to be subbed out.

Clayton Oliver, as he has been all season, was everywhere and in everything except the ice bath, and fairly won the Neale Daniher Trophy. But for his industry, he as a midfielder could not compensate for the Demons’ structural weaknesses in the absences of Steven May at one end of the ground and Tom McDonald at the other.

On an icy day, there was heat in the game throughout. Both teams sought to attack directly, making for few dead or even slow passages of play. It was anything but the dour contest the scoreboard might suggest.

Collingwood kept trying to stoke the game up, Melbourne to damp it down. In the first half, the Dees controlled play for substantial periods, but were hampered by a personnel problem and tangled up by the net of Collingwood’s backline. 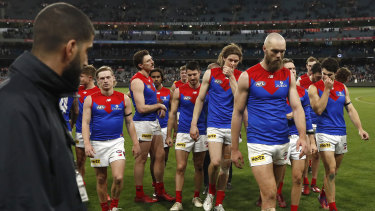 But the Magpies squandered too many gettable shots at goal in the first three, meantime gifting Melbourne three with strays handballs and a Darcy Moore kick straight into a Kossie Pickett smother. All were born of this season’s attacking policy, but told against them nonetheless. At that stage, it looked as if they would miss by that much.

But weight of running numbers eventually prevailed, and the hallmark play in the last quarter was yet another set of Magpies streaming through the middle of the ground towards goal. No account of the day can complete without an honourable mention for the ever underrated Jack Mihocek, who was good for his four goals.

Angus Brayshaw stepped up in an unlikely way in the second half to emulate the missing May as an intercept half-back and was his side’s next best player to Oliver. But Darcy Moore and Jeremy Howe were two of the same at other end. Simply, the Magpies had more.

For the first time in years, snow smothered the Alps this Queen’s Birthday. Like the Magpies this season, it had come from nowhere.