There’s no bells or whistles about Karen Paxman.

No frills, no fanfare, Melbourne’s gun midfielder is a model of consistency with a magnificent mullet. 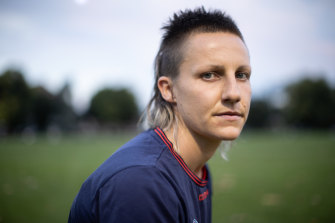 And the numbers tell the story of the 32-year-old who’s key to the Demons’ chances in Saturday’s preliminary final against Adelaide.

Paxman averages the most disposals in the history of the competition, averaging 20.9, between 2017 and 2021, ahead of Giant Alyce Parker and North Melbourne’s Ash Riddell (20.7).

“She’s not spoken about like [Maddy] Prespakis, she doesn’t kick goals or take speccies like Erin Phillips and doesn’t have the profile of other players but to me she’s just an influential,” teammate Lily Mithen says. 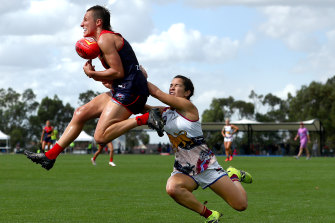 “Paxy doesn’t have a flashy highlights reel but if you’re a Melbourne supporter you adore her because she’s so consistent and competitive. She doesn’t give heaps of time and energy to building a profile, her interest is solely to win games of footy, love and adore her teammates and try and win a flag.

“It’s a credit to her that she’s stayed true to herself and continued on her merry way.” 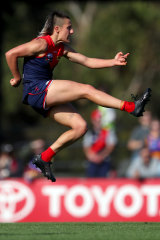 Paxman has again earned selection in the All-Australian squad. Paxman and Roo Emma Kearney are the only two players to have made the final team every season of the league.

“I’ve always been a bit of a perfectionist, if I set my mind on something, I like to do it well,” she explains. “Playing my role well for the team is my biggest motivator. I don’t like losing, that helps too.

“Being at Melbourne’s allowed me to get the best out of myself, grow and improve each year and they hold you accountable, which is awesome. The last few years I’ve really got into the gym, which I’d never really done, so it helps having access to those facilities.”

“In the first season we had an app for our weights and I think Daisy [Pearce] discovered Paxy hadn’t even downloaded it. We’d been using it for six months and she was still that much stronger.

“Now, she’s first in the weights room and her physicality and strength is one of her biggest attributes.”

Mithen has a front-row seat to Paxman in full flight, “sometimes too close because every now and then she gives me an elbow at training”.

“She’s so competitive and I admire how much she cares and wants us to succeed. She wants to be the best she can and by doing so brings everyone else along for the ride.

“And this year we’ve seen a better Paxy, if that’s even possible.”

The eye-catching hairstyle was cut during, and lives beyond, last year’s lockdown.

“I got the courage up because I wasn’t seeing anyone and I thought ‘just do it’,” Paxman says.

“A hairdresser friend cut it but wasn’t sure. I just said ‘do it, if it looks shit, it’s still funny.’ ”

Paxman is on a social media detox. Her girlfriend doesn’t have it and ″⁣it’s rubbed off on me”.

Living in the moment on, and off-field, is important, players working closely with club psychologist Dr Alyse Wilcox on being present.

“This season I made a point of stepping back off socials,” Paxman says. “I found it a bit of distracting at the beginning of the season. That’s one thing I’ve done to be a bit more focused.

“I was on it a lot, looking and scrolling. I was focused on my phone and I didn’t want to be.”

“That’s cool. When people in the spotlight make positive commentary about the game, players and performance it’s really powerful,” she says.

“Our boys get on-board, they sent through a whole heap of videos last week. Max [Gawn] after our game sent me a message saying good job. It feels really good.”