The only people pleased to see Eddie Betts retire, as opposed to seeing the soul-destroying sight of the back of him, are defenders according to one of those sad but relieved backmen, Dylan Grimes.

“He was just that player that kept you on edge 100 per cent of the game, and the slightest little sniff could mean a goal or two against,” said Richmond’s Grimes, one of the men to have spent a career being stressed by the idea of having to man the master conjurer Betts for a game. 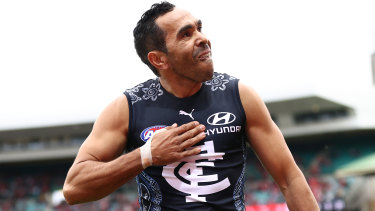 “He was just so good at sniffing out an opportunity and capitalising on that opportunity.

“I don’t think there will be a football fan in the land that won’t be disappointed that he is retiring, but there will certainly be a few backs that are very relieved they won’t have to play on him again.”

Modern game plans ask more regularly for teams to play with a group mentality when it comes to defending. One player seldom plays on one other player in defence – they zone off and move across and double team, and cover for one another.

That is, unless they played on players such as Eddie Betts, who demanded undivided attention and afforded an opponent no liberty to leave him alone to go and help a teammate.

“I don’t think there will be a football fan in the land that won’t be disappointed that he is retiring, but there will certainly be a few backs that are very relieved they won’t have to play on him again.” 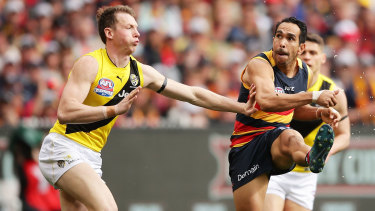 Eddie Betts snaps at goal for the Crows under pressure from Tigers defender Dylan Grimes in the 2017 grand final.Credit:AFL Media

“He played above the level in terms of how to read the ball and what the moment needed, and when he had that opportunity he had that uncanny knack of being able to kick anything he got his hands on. He was an unbelievably stressful player to play on.”

But, unlike other opponents for whom crossing the white line was a trigger to bring out their uglier self – the anger, the niggle and aggression – the white line never changed Betts’ natural disposition. The game was always supposed to be about having fun for him.

“People build up this real competitive nature between a back and a forward. Ruthless. Almost go into battle against one another, but the true testament of Eddie Betts was the quality of person away from footy that made him so special,” Grimes said.

“For people to know and recognise him for the work he did off the field shows you what a special person he was, or is.

“That smile, I don’t think anyone would forget that smile. He loved the clubs he played for, loved his teammates, but he was the first player to help you up off the ground or shake your hand after a game.