Home » Rugby » The run home: Who makes the eight?

With only one game remaining in round 16, most teams have two games left to finish one of the craziest home-and-away seasons on record.

So, who will end up with a double chance and who can sneak into the final spots in the top eight? 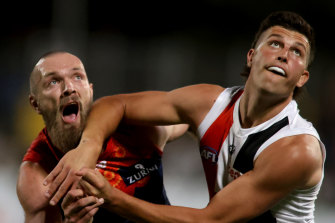 Collingwood
Remaining games: Gold Coast (G), Port Adelaide (G)
The second-half comeback against arch-rivals Carlton looks to have proven pivotal for Nathan Buckley’s team. Even if they lose the final game to ladder leaders Port Adelaide, a win in round 17 over Gold Coast should be enough to lock in a finals spot. Lots of other results would have to go against them for Collingwood to win 9½ games and still miss. The Magpies play both of their games at the Gabba, a venue where they’ve won nine out of their last 11 games.
Predicted finish: 8th

GWS
Remaining games: Melbourne (G), St Kilda (G)
How can you predict anything when it comes to the Giants after watching them lose to Adelaide? They would need to win both remaining games and hope to take the spot of either Collingwood or the Western Bulldogs. Hard to tip them against anyone right now, so you couldn’t have them playing finals.
Predicted finish: 9th

Western Bulldogs
Remaining games: Hawthorn (AO), Fremantle (CS)
A Marcus Bontempelli inspired win over the West Coast Eagles has put the Dogs right back in contention. They simply need to take care of games against lower-ranked Hawthorn and Fremantle to play finals, but one mistake could see them forfeit their spot to GWS or Melbourne. A tricky final-round clash against the Dockers looms as vital.
Predicted finish: 7th

Melbourne
Remaining games: GWS (G), Essendon (MS)
The Demons’ season was given a lifeline when GWS stumbled against Adelaide and now the two face off in a crunch game. If they were to somehow win both remaining games, they would finish on nine wins, meaning Collingwood would have to lose both games and/or the Western Bulldogs would have to lose one. They do have a good percentage.
Predicted finish: 10th

Carlton
Remaining games: Adelaide (MS), Brisbane (G)
The Blues’ season was on the line twice in two weeks when leading against Collingwood at half-time and against GWS at three-quarter-time. They let both those leads slip and even a mighty comeback against Sydney won’t be enough for David Teague’s team. They’d have to thrash Adelaide and then beat Brisbane to be any glimmer of hope to make the eight on percentage. Put a line through them.
Predicted finish: 11th

Essendon
Remaining games: Port Adelaide (AO), Melbourne (MS)
Essendon’s CEO Xavier Campbell, goal kicking legend Matthew Lloyd and members have all called for a response after last week’s putrid performance against Geelong. The only trouble is they have to go to the Adelaide Oval to play ladder leaders Port. Even with two unlikely wins to finish the year, it’s hard to see the Bombers playing finals.
Predicted finish: 14th