A constant threat around goal, the small forward is regularly seen lighting up the attacking half.

In another world, he might well have been starting the A-League season, or better yet, helping the Socceroos qualify for next year’s World Cup. Instead, as a probable top-10 pick at the AFL draft, his repertoire includes an exciting sense of swagger that is not dissimilar to that of soccer’s global stars. 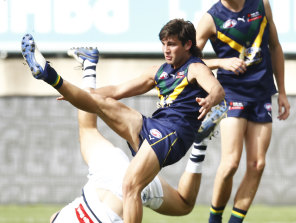 It is not all that surprising, then, to learn that part of his athletic development came alongside Australia’s all-time leading goal scorer, when his soccer prowess was first recognised by Melbourne City with a scholarship contract.

“At a younger age, I was around players like Tim Cahill,” Rachele told The Age when quizzed about his time in the A-League club’s academy, when Cahill was playing for City. 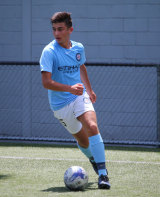 Rachele during his stint with Melbourne City’s academy.

“I think I was more into soccer as a kid. Year eight to year nine I pursued soccer on its own, I didn’t really play football much. I got offered a scholarship contract at Melbourne City as a 15-year-old.”

Rachele made the Australian squad as an under-17, but was disappointed when eventually omitted from the team. The former centre-back reverted his attention to football searching for better camaraderie.

“From day dot at Melbourne City, it was purely based on individuals. I know it’s a team sport, but there wasn’t really a team aspect,” he reflected.

“When I came back to playing football, a lot of my mates from school were playing. It really brought me back to wanting to play football for that mateship. I feel like I’m a very sociable person, I pride myself on having a lot of friends and being close with a lot of people across different friendship groups. It was a good balance to perform, but have fun as well.”

The decision is proving a wise one. Rachele, who hails from Shepparton, captured attention while playing for the Murray Bushrangers when he followed up a game of four goals and 17 touches in April with a bag of six in July.

Playing for the AFL Academy against Geelong’s VFL outfit early in the season, he flexed his booming right-foot boot with an impressive 55-metre goal.

Already armed with an action-packed highlights reel, the 180-centimetre forward’s game is not centred around high numbers, but rather, high impact.

“I’ve never been that person to rack up 30, 40 touches a game, I’m probably more that impact player. That’s been since a young age,” he said.

“I’m on the smaller side, but that’s never been an issue. I’ve never thought about height too much. My jumping has always been a big thing along with my strength and pace, and kicking goals is my favourite thing to do, and the thing I’m probably best at.”

The excitement machine’s initial football influence came through his father, who he describes as a “local legend” in recognition of the “few hundred” games he played for the Shepparton Swans.

Rachele’s paternal grandparents are Italian — he speaks and understands some of the language — while his mother’s parents are from Greece, although most of his family resides in Shepparton.

Being an elite junior sportsman while growing up in the regional town presented challenges given the constant need to travel to Melbourne, but it also ensures Rachele will have a head start on his peers once drafted into the AFL system.

“You’re in those elite habits, you’ve got high expectations of yourself from a young age,” he explained. “You’re recovering well, you’re eating well, my organisation skills had to increase a lot. I had to leave home for two hours to get to training nearly every day for soccer.

“Things like that, balancing my time to get homework done or see teachers, eat the right food, sleep well, prepare for the next day or the game coming up. It’s been good to get me to where I am now with my football. I feel like I know what it takes to be an elite athlete.”

Robert Elstone: Super League executive chairman to step down from his position

‘They are hysterical’: Bennett slams Origin doomsayers amid high-shot crackdown