Home » Rugby » The trouble at North: why club chiefs should be nervous

That Geoff Walsh has been commandeered back to North Melbourne to conduct a month-long review of the underperforming football club does not bode well for David Noble and his future there.

Nor can it be of much comfort to club chief executive Ben Amarfio that he is nominally working alongside the veteran administrator in attempting to make sense of the Kangaroos’ dysfunctional football operation.

The Walsh “review” – a term conspicuously avoided in the club’s carefully worded Thursday media release – came about through a series of conversations at board level primarily between director and former captain Anthony Stevens and Walsh, his former CEO. As the internal finger pointing intensified recently, Stevens saw Walsh and his combination of fresh eyes and Shinboner DNA as the right man to make sense of the blame game. 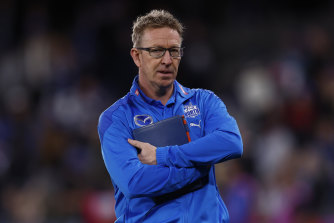 Top-level conversations at the competition’s head office – where North Melbourne’s woes remain front of mind – also identified Walsh as a potential fixer, recalling the lengthy review he oversaw at Carlton last year, which led to a football restructure and the departure of coach David Teague and chief executive Cain Liddle. (Although the AFL on Thursday quickly removed him from its working group setting up the football framework for a Tasmanian team, fearing a set of potential conflicts.)

The most significant wheel was set in motion late last month after Walsh contacted Kangaroos president Sonja Hood. He was visiting New York and had just read about the mass exodus of the club’s recruiting staff as the heavy on-field losses were piling up. The two last worked together on the North executive in 2016 before Walsh moved to the top football job at Collingwood and Walsh told Hood he would like to help his old club.

It won’t take Walsh long to understand that North is a club divided. To be brutal, the Kangaroos have never really recovered from the forced retirements of 2016 – and Walsh played a big part there – when a devastated Brent Harvey led a quartet of experienced teammates out the door.

The strategic missteps have continued, and it was symbolic this week that Harvey – who North continue to employ in a part-time coaching role and as a runner – stated on social media his support for the prodigious and turbulent No. 1 draft pick Jason Horne-Francis and his decision to defer his commitment to the club. This is not the work of a united team.

The lack of unity exacerbated by the heavy defeats have also been accentuated by North’s decision to bring in another outside consultant. It seems extraordinary that Paul Roos with his leadership man Gerard Murphy remain on the payroll. Roos has spent a large part of the year in Hawaii, and his ongoing value is being questioned by senior people at the club.

Roos was a key player in Noble’s appointment but as the struggling coach works to build a relationship with and improve the performances of his disenchanted players the retired premiership coach who helped deliver him is rarely a physical presence at the club.

So, Walsh will walk into his old club on Monday to observe a coach with whom he has no relationship and who did not see him coming. In a four-round crash course he will watch the dynamics of the coaches’ box and attempt to make sense of the disconnection between coaches, players and the remaining recruiters and football bosses who partly inherited this mess, but have shown no ability to fix it. 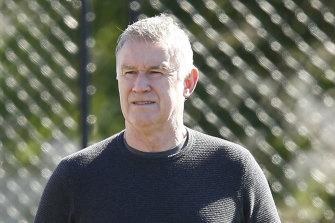 Everyone in football knows the way this normally ends. Noble, who in his final year as football boss at Brisbane seemed set on a path to become a club chief executive, chose to become a senior coach instead and to date appears to have made the wrong choice. The North coaching group can rightly blame list management and recruiting, but Noble has not managed to win over his players nor unite them, and he is unlikely to remain at the club beyond 2022.

Nor is there unity among the North executive. Amarfio will not like this, but it remains difficult to reconcile his physical absenteeism from the club during the 2020 COVID-19 crisis as Rhyce Shaw’s struggles intensified and rookie football bosses including Brady Rawlings had to oversee the unhappy Queensland hub. Rawlings, whose title is head of football talent, has taken a less senior role than originally envisaged, but his performance, too, will come under scrutiny.

North blame the AFL for poaching the club’s administrative rising star Laura Kane and the AFL blames North for not appointing Kane to the top football job when they had the chance. Either way the club’s football operation looks thin – a situation underlined by the recruitment of Walsh as another outside consultant. Relatively new football operations boss Daniel McPherson had already undertaken a football review over the bye round, but clearly more work and tougher decisions were required.

Walsh’s return to North in a third reincarnation – he first joined the club almost three decades ago – might well be brief. He heads overseas at the start of August but could return by the start of September should he be required to help oversee the change that seems inevitable.

Some experienced North heads believe Walsh left behind a mess in 2016, although he cannot be blamed for the disasters overseen by the subsequent five years under the Ben Buckley presidency. And Carlton’s success to date in 2022, along with the manner in which he and Graham Lowe and Matthew Pavlich conducted the Blues’ review, means he comes highly recommended.

Hood, who was running North’s community initiative, The Huddle when Walsh last ran the football operation, has spent the first months of her presidency consulting key North figures, past and present, as well as key players across the AFL. She should be seen as one of the few Kangaroos bosses secure in her role by virtue of her short time in the job, although this is no honeymoon period.

The appointment of Walsh is her first big play, and it looms as a strategic hit job of historic proportions.