Home » Rugby » ‘This is our Last Dance’: Eels channel Jordan and Chicago Bulls in title quest

This is Parramatta’s Last Dance.

The best opportunity to break a 36-year premiership drought and the final one to do so with the current core group of players before it is dismantled.

“Hopefully The Last Dance is not this week, it’s next week,” said one of the departing Eels stars, Reed Mahoney, in reference to the documentary that chronicled Michael Jordan’s final season with the Chicago Bulls in 1997-8.

Like that legendary NBA roster – which farewelled stars including Jordan, Scottie Pippen and coach Phil Jackson – Parramatta will part company with a slew of players integral to the club’s resurgence. Mahoney, Isaiah Papali’i, Marata Niukore, Oregon Kaufusi, Tom Opacic and Ray Stone will all depart, while out-of-favour former Blues forward Nathan Brown, despite being contracted for next year, is expected to follow suit.

Meanwhile, the future of dynamic halves duo Mitchell Moses and Dylan Brown isn’t guaranteed beyond next year. The premiership window is ajar, although some critics predict it could abruptly slam shut, potentially as soon as Friday if Parramatta can’t get past North Queensland in Townsville to progress to a first grand final since 2009.

The club is adamant there will be no spiral like the one that ended the Bulls’ dynasty, pointing to the emerging talent in their ranks and a relatively balanced salary cap. 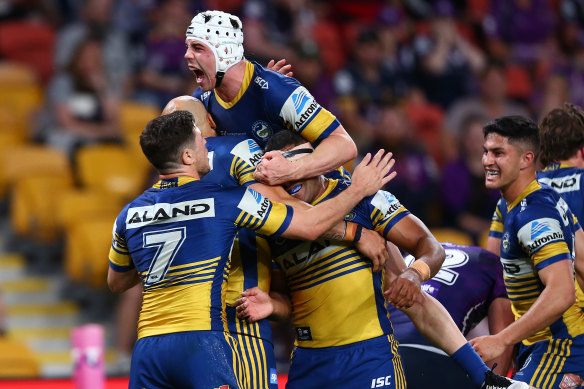 This is Parramatta’s version of The Last Dance.Credit:Getty

Regardless, opportunities like the one the Eels currently possess come along rarely and those on the journey want to take it before some disembark.

“We’ve got a lot of players moving on and we’ve got 14 days together, potentially, before those guys move on,” said Eels forward Ryan Matterson.

“So we do want to make the most of it and it’s definitely a motivation for us.”

Co-captain Junior Paulo added: “It’s all about creating our own history and with the group of guys we’ve got leaving next year, you want to send them out [a winner].”

“I just don’t want to have any regrets. I’ve found a team that’s given me an opportunity to live out my dream.”

The biggest losses will undoubtedly be Papali’i and Mahoney. The latter will join rejoin Canterbury, the club who cut him loose in the junior grades because they didn’t rate him as an NRL hooker. The move to the blue-and-golds has been a resounding success; Mahoney has established himself as a world-class No.9, to the point where he is on the cusp of a Maroons call-up. There is extra motivation for the 24-year-old against the Cowboys: the preliminary final will mark his 100th first-grade game.

“It means a lot,” Mahoney said. “It’s something I wanted to achieve before I left Parra. I don’t think there’s a better occasion to be playing on, I’m looking forward to it.

“There have been a lot of ups and downs along the way. I’ve got to thank the people around me for getting me to where I am.”

Papali’i’s departure is less straightforward. The Kiwi international has signed a three-year deal with Wests Tigers, but has intimated he would prefer to stay put. Knowing that every game with the Eels could be his last, he wants to ensure his stint doesn’t finish without a premiership. 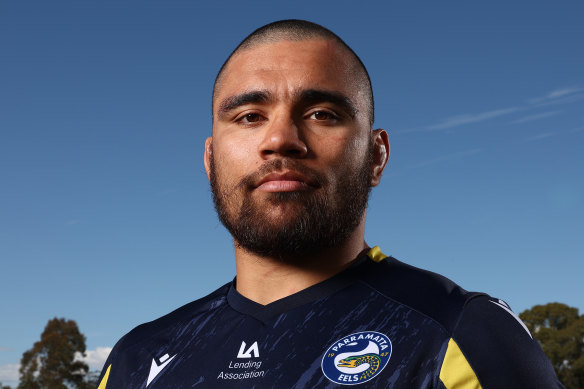 The playing future of Isaiah Papali’i remains clouded despite putting pen to paper on a deal to join Wests Tigers.Credit:Getty

“We’re enjoying what we have left because it’s not that long, it’s two weeks at most.

“I’m definitely going to enjoy it and take in everything while I can and whatever happens happens. I just don’t want to have any regrets. I’ve found a team that’s given me an opportunity to live out my dream. I want to take it with two hands and give it all I can.”

Papali’i has been publicly non-committal about his intentions for next year and his stance didn’t change at the club’s only player media session for the week.

“One or two more games and then I’ll sit down with [manager] Daniel [O’Loughlin] and make sure we do it the right way,” he said.

“The next two weeks could be the biggest weeks of my life.”

Like the Bulls of 1998, the Eels have stormed into the penultimate week of the season after a string of impressive performances, most recently last week’s 40-4 demolition of Canberra.

Asked who is playing the role of Jordan in the Eels squad, Mahoney said: “We’ve got a lot of MJs throughout the team who are doing a great job for us.

“Over the last six weeks we’ve all done our job. We’ve had a few different players each week stand out, but everyone has been seven-eight out of 10 doing their job. If you have 17 players doing that, it takes you a long way to winning the game.

When asked to nominate the Eels’ equivalent of Dennis Rodman – the flamboyant forward who made headlines for everything to his love interests, Vegas benders and friendship with North Korean leader Kim Jong-un – Mahoney offered: “I don’t know who Dennis Rodman is.”