A week of heartache and legal threats ended in unbridled joy for Wests Tigers with a 32-18 upset win over Brisbane at Suncorp Stadium on Saturday night.

Without injured playmaker Luke Brooks, the Tigers showed pride in their jersey to rebound from Sunday’s controversial loss to North Queensland to end a six-match home winning streak by the Broncos.

The boilover means Brisbane, who made several uncharacteristic handling errors, drop out of the top four while the Tigers are off the bottom of the ladder.

It was five-eighth Adam Doueihi, in an 18-point display, who stood tallest for the visitors and fittingly iced the game with the final try.

After giving premiership contenders Penrith, Parramatta and the Cowboys a fright in their previous three starts, the Tigers showed from the outset they would be up for the fight.

“We felt the win was coming … and this was a big achievement for us,” Doueihi told Fox Sports. 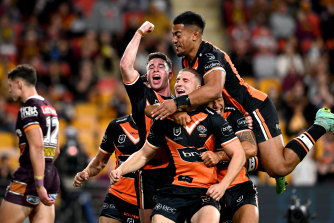 In a match of momentum swings, which was deadlocked at 12-all at half-time, two tries in three minutes early in the second half proved pivotal for the Tigers.

They hit the lead in the 47th minute when Starford To’a crossed after Doueihi batted back a bomb, accidentally kneeing Adam Reynolds in the head in the process which forced Brisbane’s playmaker off for an HIA.

As Reynolds was being assessed, Zane Musgrove barged over Cory Paix and was awarded the try, despite the hint of a double-movement, for a 12-point advantage.

The Broncos got themselves back on track, just as Reynolds was cleared to return, when Jordan Riki barrelled over three defenders to score but they wasted comeback opportunities with poor handling. 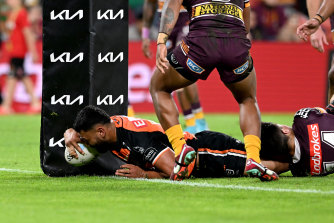 Young playmaker Jock Madden ensured Brooks wasn’t missed in the first half, setting up one try and scoring the second for the visitors to hush the home crowd at half-time.

The Tigers were first to strike when Madden combined nicely down the short side to help put Brent Naden over in the corner in his 50th NRL appearance.

But the Broncos shifted momentum with a string of offloads to gain field position before Reynolds worked his magic for two quick tries midway through the first half to Tesi Niu and Ezra Mam.

Naden bombed a golden chance for a second try late in the first half by inexplicably stepping into touch, but a juggling Madden ensured the Tigers went to the break level by starting and finishing a rampaging break by Kelma Tuilagi.