Richmond captain Trent Cotchin and senior midfielder Kane Lambert have defended star forward Tom Lynch, after he was involved in another off-the-ball incident in the Tigers' win over St Kilda.

Lynch dropped his knee into Saints defender Dougal Howard's neck in the Tigers' semi-final triumph and, despite it being of little force, the incident will likely come under MRO scrutiny on Saturday.

It is the fifth time this season that Lynch has attracted attention for such an incident. 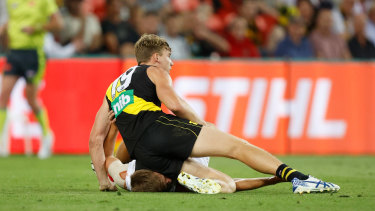 He has had two fines for striking (on Gold Coast's Sam Collins and Jarrod Witts), was sent to the tribunal for a strike to Bomber Michael Hurley's neck and was fined for misconduct on Brisbane's Alex Witherden.

None, including Howard, were injured as a result.

"There's no questions asked about the way Lynchy can impact a game of footy," Cotchin told 3AW.

"It would have been nice if he kicked 5.2 instead of 2.5 but just his contest work … his physicality and that tackle when he came across … you love seeing your big blokes do that.

"Dimma [coach Damien Hardwick] is the first to admit he likes his players to play a physical brand of footy. Obviously to the line, but clearly there are rules in place as well.

"That was the conversation we had [about discipline]. We felt as though we let ourselves down as a group in a few moments in the Brisbane game."

"I am not sure that conversation will happen. Tom is a mature guy … Jack [Riewoldt] has done a lot of work with him over the years

"We love Tom playing aggressive. I am sure we will get a similar result for him next week when he is hopefully lining up for us, which I think will happen."

Leigh Matthews said the Lynch incident should be sent to the tribunal.

"I don't think Tom Lynch should get a week. But he should go to the tribunal. There is a prima facie case that he appeared to kneel on Howard's head. That's enough to constitute rough play and it should be sent to the tribunal to adjudicate," he said.

Hardwick told reporters post-game: "I don't want him giving away free kicks, don't get me wrong, and I want him playing within the rules, but Tom is an aggressive type of player.

"The way he jumps at packs is incredible, but I think what happens is we tend to focus on the 20 per cent – not the 80 per cent – [of] the incident that is minuscule."

Cotchin was also asked about his high tackle on St Kilda's Zak Jones. He said a tackle accidentally slipping high was "part and parcel of the game".