Wests Tigers' big earners Josh Reynolds and Russell Packer should be snubbed from selection the remainder of the season as punishment for their half-time Brookvale exit.

So say Tigers greats, who were stunned to learn Reynolds and Packer had left Lottoland early on Saturday night and were nowhere to be seen when their teammates staged one of the great late comebacks of the season to down the Sea Eagles 34-32. 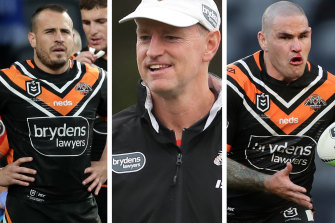 "It's a sad reflection of the club. It was one of our greatest wins of the year and we should be talking about what a great victory it was. Those two, it shows where their heads are at.

"I wouldn't pick them again this year. It's all hands on deck because we're an outside chance to make the eight, and as a team you never know when you might need someone, but that would send a bad message to everyone else and imply it's acceptable because it's not.

"Discipline is a part of success. That showed a lack of discipline.''

Balmain's representative prop Steve Roach, who was at the ground on Saturday night, said: "They'd want a good excuse, but I don't think there is an excuse. A lot of it is about the coach trusting you. I don't think 'Madge' [Michael Maguire] will use them again. 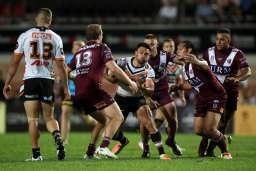 "You can't not hang around. It's all about attitude, who knows if these guys would have been used next week, and you have to be ready. [Leaving early] is no preparation for a game.''

Should the Tigers defeat Souths on Thursday night, they will be right in the hunt for an overdue finals berth with games against Melbourne away and then Parramatta at home.

The Tigers ditched the team bus and allowed players to drive to the ground, especially with several players finding it easier to go straight to the ground rather than via their Concord base.

Packer and Reynolds are both off contract next year and have reportedly been told they are free to find a deal elsewhere. The Tigers were prepared to stump up more than $600,000 for Reynolds to return home to Canterbury when the season resumed after the COVID-19 shutdown, only for the Bulldogs board to pass. 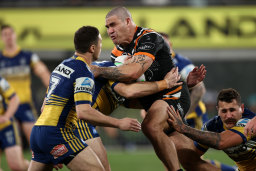 Russell Packer charges into the Eels defence earlier in the year.Credit:Getty Images

Packer was part of the club's leadership group last season.

Tigers chairman Lee Hagipantelis told the Herald over the weekend: "It's not a good look for two of our players to leave at half-time.

"I have spoken to both of them and they've acknowledged it wasn't a good look. There was no intention on their part to show disrespect or a lack of unity. Russell suffers from an arthritic condition and had multiple surgeries in his foot to try and help him play again. Sitting there in the cold does affect him, that is true."