Rabbitohs winger Alex Johnston heads into this weekend’s grand final just one try away from South Sydney’s season try-scoring record, saying his incredible feats are all down to the hours of practice he puts in diving for the corner.

Set by Les Brennan in 1954, Johnston has equalled his 29 tries in a season – the most of any NRL player this year.

Johnston said try-scoring had become similar to “riding a bike” for him, but the 26-year-old is still looking for ways to improve his skills.

“I want all the tries just to be me catching the ball putting it down, easy as that and I hope it can be like that this week,” he said.

“I’ve blown a couple of tries the last couple of years, so I’ve still definitely got things to work on.”

Despite being the competition’s leading try-scorer for the past two years, Johnston is still not satisfied with his ability. 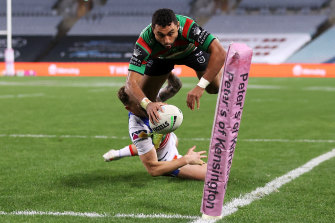 “I’ve still got to tweak a few things. There was one time I put my hand on the sidelines. Since then, I’ve been practising not to do that,” he said. “There is a still a lot of work that goes into it.”

He also believes he owes his try-scoring record to his teammates and praises them for their ability to set him up.

“I’ve got a lot of guys inside me that are brilliant. Cody Walker, Latrell Mitchell, Dane Gagai, Benji Marshall. They’ve given me some pretty good ball,” he said.

Johnston is contracted for next year and is in discussion with the club about signing on for another two years until the end of 2024.

“We’ve been talking for a little while but won’t finalise those discussions until the season concludes,” Rabbitohs chief executive Blake Solly.

“We’d love Alex to stay, he’s been a huge contributor to the club. We have a high opinion of him not only as a footballer but as a person.

“A number of those discussions will be finalised after the grand final.”

Youngs must wait for Lions audition after being benched by Leicester