Dublin: Wallabies coach Dave Rennie believes bad luck is to blame for five potentially tour-ending injuries as Australia scramble for solutions ahead of a clash against Wales following a chaotic night in Ireland.

The Wallabies, who lost 13-10 to Ireland, have had an unusually high number of injuries this year but team officials continue to argue that it’s simply a case of bad luck and not reflective of over-training, nor the program as a whole.

“The medics are going to be busy,” Rennie said on Sunday. “[It is] bad luck. It’s a collision sport and a number of those were from collisions. We’re still assessing things.

“Definitely four of those guys are out and Bobby [Valetini] is likely to be out.” 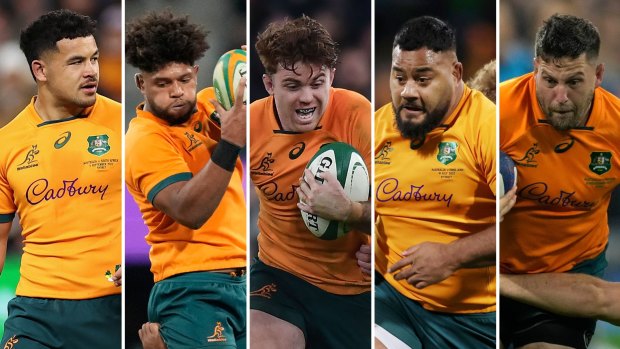 An official update is expected in coming days, once players go for scans, but the likelihood of either five featuring at Principality Stadium is looking extremely slim.

If there is a small silver lining, it is that all five players are specialists in different positions: a centre, a hooker, a back-rower, a prop and a fullback.

The most worrying of the five is Tupou, who clutched at his knee after falling to the turf while taking a carry in the second half.

Rennie said Tupou’s was “potentially an Achilles” injury. If that is the case, the Queensland Reds prop could be spending months on the sidelines. 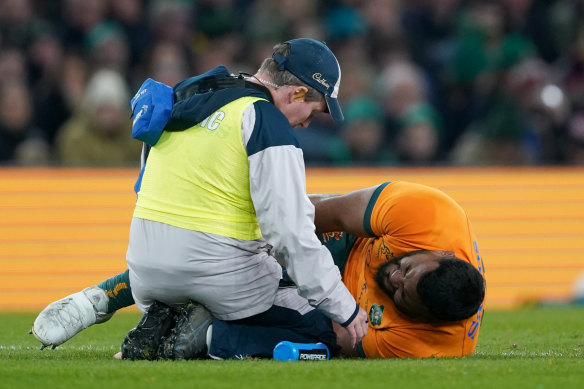 It would be somewhat premature to speculate on Tupou’s injury but if he has ruptured his Achilles, that could impact on his hopes of lining up at a second World Cup, which begins in September.

Australia’s night started badly when Paisami limped from the field in the fourth minute with what Rennie said was a medial collateral ligament (MCL) injury.

The problem for the Wallabies is that with Lalakai Foketi already sent home due to injury, the team doesn’t have a back-up No.12.

Given the Wales match falls outside the international window, the Wallabies won’t be able to call up someone like Irae Simone, given his French club don’t have to release him.

The most inconvenient injury of the night was Porecki, who picked up a head knock in the 24th minute and didn’t return. Rennie said he would likely have to sit out 12 days.

Things got complicated when back-up hooker Folau Fainga’a was yellow-carded, leaving Australia with 13 men at one point and having to pack scrums uncontested. Jed Holloway and Michael Hooper were forced to have a go at lineouts.

Valetini has picked up an ankle injury — “it could be a syndesmosis … he’s doubtful for next week” — while Kellaway was the last of the major injuries with a toe problem.

“We ended up with [halfback] Jake [Gordon] on the wing,” Rennie said. “For all of those reasons, the guys barred up. We had every reason to fall apart with all the changes but we hung tough and had a chance to steal it at the end.

“We’ll have to go into the depths of the squad again. I guarantee you there are guys itching for another opportunity after the Italy effort.”

Halfback Nic White was taken off for a head injury assessment but cleared to return. Despite some commentary on social media that he looked uneasy on his feet, White and Rennie were adamant the appropriate process had been followed.

“I felt fine. I passed my HIA and I went back on. I remember everything, clear as day, I feel fine,” White said.

Watch all the action from the Wallabies Spring Tour with every match streaming ad-free, live and on demand on Stan Sport.

Why Cameron Smith’s next move isn’t cut and dried

INTERVIEW: Tom de Glanville and dad Phil, on living up to expectations

‘As South Sydney as they come’: Rabbitohs set to make Reynolds captain