Over and over in the last couple of weeks, Oscar McDonald has found himself in the right place at the right time.

On Carlton’s list in the first place, on the forward line in pre-season games, on the sub’s bench for round one, then on the ground and on the list of goalkickers as the Blues lost narrowly to Richmond; these were all improbable destinations for McDonald after he was delisted by Melbourne at the end of last season. 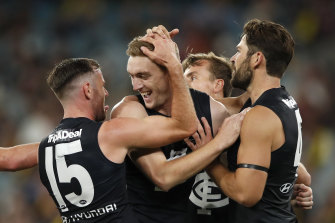 One of them, the sub’s seat, didn’t even exist until the day before the game. Now it has given him a niche spot in footy history.

“That has come up a few times with friends,” he said. “The first medical sub to get on: they reckon that’ll go down on a trivia night or the back of a bottle cap.”

It also means McDonald has played and kicked two goals for Carlton before officially getting a guernsey.

Barely two weeks ago, McDonald still thought he might end up playing amateurs or in the VFL this season. Carlton, with whom he’d trained through the off-season, offered him the last spot on their roster. It was nine days before round one. “I’d trained as I’ve played for the last six years, as a defender,” he said. “Then a couple of forwards got injured, so I played the [AAMI series] game against St Kilda as a forward/ruck.

“It was never my preferred position, but I showed a bit of versatility, which I suppose helped me get the last spot on the list.” New club and new position added up to a new lease of footy life.

Come match week, McDonald was told that he wasn’t in the team, but might be the sub, if there was one. On match eve, it was confirmed. But in terms of how to prepare, it left him in no-man’s land. “Do I warm up with the group?” he said. “Do I relax until the time comes, if the time comes?”

McDonald’s parents live four-and-a-half hours away in the Wimmera, and he told them not to bother. Before the match, new Blues Adam Saad and Lachie Fogarty were presented with their guernseys, but McDonald was not. After all, his might not have seen active service. On the bench, he had to wear a jacket over it. “That seems to be the rule,” he said.

He tried to strike a balance between ready and spent. “The emotional and mental energy, that can be draining if you’re sitting on the sidelines and you’re trying to stay ready and alert the whole time,” he said. “You wouldn’t want to have used all your energy to stay focused and switched on the whole time. You might be waiting three-and-a-half quarters.”

Instead, he looked around as he would not if he was in the game. “We’ve had no crowds for a year-and-a-half,” he said. “The noise at the start of the game was something else.

“Fifty thousand, not just any fans, Carlton and Richmond fans.”

He’d read the stats. “On average, there’s one injury per game that would require the use of a sub,” he said. “So I think it’ll get used a fair bit.”

Sure enough, at half-time, there came a tap on his shoulder: you’re in. “What position?” he asked.“Who’s gone down?” He hadn’t realised Jack Silvagni was hurt. “Most likely forward,” he was told, “but we’ll work that out.”

McDonald returned to the arena to spend five minutes loosening up and kicking with a runner. Within three minutes of the restart, he’d kicked a goal. 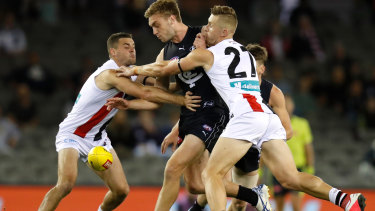 “I was gifted it with a downfield free, but it relieved the nerves,” he said. “I’d played a bit of footy at AFL level, but for a different club in a different position. So to get that first one out of the way freed me up. It was a very surreal experience.”

In the last quarter, he kicked another goal, easy as you like from 50 metres. In 81 games for Melbourne, he kicked one, total. Now he had two in a half. He was not completely surprised. “At training, when we have goal-kicking practice, the backs beat the forwards anyway,” he said. “Maybe it’s something I’ll hone in on a bit more now.”

Two goals matched brother Tom’s round one return, back at Melbourne. “But he missed two sitters,” Oscar said. “We’ll have to wait another week to compare.”

Having landed on his feet, McDonald’s aim now is to keep them. “My goal was always to train and perform as well as I could in the pre-season and try and get that list spot,” he said. “It’s been ticked off. Now I want to help the team in any way, shape or form.

“Originally, it was as a defender, and most likely a back-up defender – the backline’s strong – but that role might change slightly. I’m hoping to train a couple of different positions so when the opportunity comes to be in that 22, I’ll grab it with both hands.”