The timing has been somewhere between exquisite and excruciating, extraordinary and … yeah, nah … excruciating.

Consider the current state of play when it comes to the NRL and concussion. 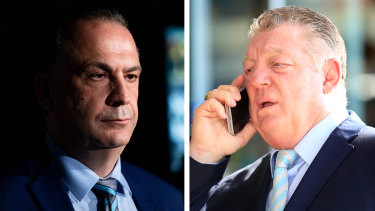 Staggeringly, in this general thrust against the changes ushered in by V’landys, Gould was joined by none other than the senior players of the NRL who, according to Danny Weidler, are looking at ways of removing V’landys from his position!

“We don’t know what to do and we feel like we have not got the power to remove him,” a senior player told Weidler, “but what is going on cannot keep going on. He is affecting the product and he is taking the fun out of the game.”

A small parenthesis here. Surely it is only in rugby league that the employees of a huge business could let it be known that they are out for the boss’s scalp on the grounds he is trying to make the game safer for them! Is there any business anywhere in the world you can think of, where the employees have tried to do the same. (I mean, #FFS!) Close parenthesis.

And so to the excruciating timing of the whole thing.

Right in the middle of this imbroglio is at its height who pops up?

Why, none other than a beloved legend of the game in Steve Mortimer – a contemporary of Gould’s – announcing that at the age of 64, he has dementia and from playing league, “part of my brain has died”.

Get it, you critics? Steve Mortimer, has said that a part of his brain has died from playing the game!

This at a time when in heavy contact sports around the world, you have legal cases up the wazoo, many of them posing existential threats to the governing bodies of those sports. At a time when, here in Australia, ever more legal cases are coming down the pipe and anecdotally at least, you have more and more players just like Mortimer, coming forward and saying they have suffered brain damage from playing the game.

A month ago, I heard a detailed first-person account about a league player of the same generation, of even higher regard than Mortimer, having to be hospitalised after reacting very badly to finding himself in an unfamiliar situation. He became so distressed in hospital they had to sedate him, and put a security guard on his room. Wait till that name emerges, and see the headlines.

Friends? These are players from four generations ago, when the blokes playing were of more or less normal size, not the bristling behemoths they became through serious professionalism. Back then they held other jobs and had minimal sub-concussive impact training. For the last quarter-of-a-century though, their training has been all day every day, inevitably with much more brain impacts than Mortimer and his generation ever faced. So if this is what is happening to players of that generation in their 60s, just what is it going to be like when those who are 10, 20, and 30 years younger get to that age? Does anyone think that in coming years there is not going to be an avalanche of shocking cases, mixed with devastating legal cases, coming straight at the NRL? (Much as I have warned for the last 10 years or so, I might say.)

Who, seriously, thinks that the NRL can simply go on the way that it has, with the game built on huge hits, commentators regularly crying out “Get that into ya!”

In sum, Phil Gould, it is all very well to say that V’landys and “the people who are making these decisions don’t understand the game,” but the truth of it is that it is people, like you, who oppose the changes being made who are the ones who don’t understand. Get this into you: the entire existence of the great game of rugby league is under threat.

Peter V’landys’ crackdown is the only chance the game has, and even then it is going to be a close-run thing.

Swans stay in Sydney, but club will be counting the cost