As Collingwood mulls the penalty to impose on Jordan De Goey for his controversial Bali video the club has been embarrassed by another video emerging of two young players rating women.

The video posted on social media features young forward Jack Ginnivan and emerging star defender Isaac Quaynor videoing themselves lying in a bed playing a Tik Tok game in which players rate members of the opposite sex.

The footballers are videoed giving imaginary women a rating out of 10 on their looks. The game then requires players to re-rate the person based on new and specific information about them such as that they are homeless or rich, or have bad teeth.

The juvenile game is popular among teenagers and sources said the pair did not initially realise the offence it would cause when they posted the video online.

The players took the video down on Monday night but it had already been viewed by hundreds of people and shared.

Collingwood will release a statement about the video later today. 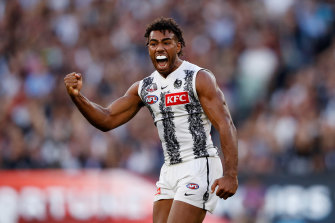 The game requires people to rate a person on looks alone and then give a re-rating after being given new and very specific information about them – either their looks, background or financial situation.

The intention is to test how much looks matter to a person when presented with new information and how new information can change a person’s attitude for better or worse.

The timing of the video for Collingwood and the players could not be worse, coming after the Jordan De Goey Bali video.

The club will on Tuesday reveal the punishment for De Goey for his behaviour in Bali which had deeply upset the club in its disrespect for women.

At the weekend the club pulled a contract offer to De Goey of two years with a trigger for a further two years, on about $800,000 a year.

At least two other clubs had expressed interest in De Goey and were looking at terms of at least five years on more than the annual amount offered by Collingwood.