Home » Rugby » Wallabies must take their chances against Wales: O’Connor

Wallabies playmaker James O’Connor says Australia must take their chances in attack when they present or run the risk of suffering a third straight defeat to Wales for the first time since 1975.

The Wallabies landed on British soil late last month with confidence sky-high after five consecutive wins but consecutive losses to Scotland and England have left Dave Rennie’s men facing the prospect of a dismal end to their year.

Both Tests were very much there for the taking but poor discipline and a lack of creativity and cohesion in attack stifled hopes of victory for the men in gold.

Australia have scored just one try in their last two Tests and now fallen from third to fifth in the world.

“It’s the fable of the man who built the house on sand,” O’Connor said. “If you don’t have the correct discipline and if your foundations aren’t strong, then you won’t win Test-match footy, especially up here. The margins for error are so small. 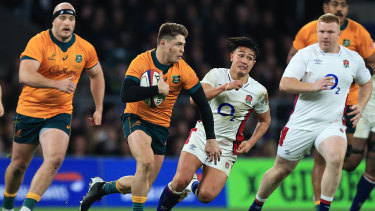 James O’Connor was composed and kicked all of Australia’s points against England but the Wallabies failed to score a try. Credit:Getty

“Back in the Southern Hemisphere it’s a lot quicker footy, there’s a lot more opportunities where you can pull the trigger and really score tries. Over here you only get a couple and if you’re not ready to take those, if you’re not in the moment, playing in the moment, then you’re going to miss them.

“We were just piggybacking them into the game. Anytime we did build [momentum] we’d lose it.”

Until recently, Australia boasted a brilliant record over Wales. From 2009 to 2017 the Wallabies won 13 straight Tests before a dour 9-6 loss in Cardiff three years ago ended that streak.

In the game that mattered most though – at the 2019 World Cup – Australia fell 29-25, which effectively set up a showdown with England in the quarter-finals.

Wales, the ninth ranked side in the world, have not beaten Australia in three straight Tests since a run from 1969 to 1975. They are coming off a 38-23 win over Fiji.

“If we let guys like [Wales playmaker Dan] Biggar into the game with his kicking, through penalties and ill discipline, we’re going to be on the back foot,” said Wallabies back Andrew Kellaway.

“There’s all sorts of emotions flying about. It was a little bit flat after the two losses in games we believe we could have and should have won, or at least put ourselves in a position to win. We get another chance this weekend, so everyone’s pumped.”

Rennie will name his team on Thursday evening (AEDT) for the match that kicks off in the early hours of Sunday morning.

The Wallabies say props Taniela Tupou and Allan Alaalatoa are progressing well in their returns from concussions that ruled them out of the England game. Rennie said after the match he was confident the pair would return.

Their inclusions would be a big boost, particularly for James Slipper who can shift back over to the loose-head side for his first Test as captain in six years after Michael Hooper’s scratching due to a foot injury.

“He’s one of a kind as far as I’m concerned,” Kellaway said of Hooper. “That’s the great challenge this week presents. A few guys are going to have to step up and shoulder a bit of that burden because the boss isn’t out there.”

O’Connor will want to finish the year favourably after performances against Scotland and England he believes he can improve on.

“From my point of view … Scotland was a slow start,” O’Connor said. “I felt like I really eased into the game and probably took a little bit too long to flatten the attack up. The England game I thought I built on that a little bit.

“We feel we’ve had a good year and we’ve really built this year, so we want to show the public what we can do.”

Watch every match of the Wallabies, All Blacks & Springboks Spring Tours on the Home of Rugby, Stan Sport.