Home » Rugby » Wallabies no match for All Blacks at Eden Park

The Wallabies team of 1986 can bask in their Eden Park glory for at least another year after the men in gold felt the full wrath of a ruthless All Blacks outfit who now have one hand on the Bledisloe Cup.

The Dave Rennie era started with optimism rife following last week’s draw in Wellington but Sunday’s 27-7 loss has rammed home just how hard it is to slay the All Blacks at a venue they have not tasted defeat at since 1994. 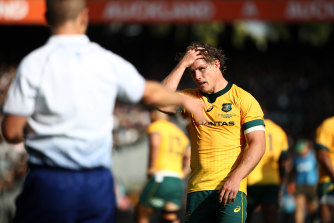 Australia’s previous six outings at Eden Park had resulted in a scoreline of 227-55 and the margin of this latest bloodbath certainly doesn’t make for pretty reading.

There is something magnetic about an auspicious Wallabies performance against New Zealand though. The doubters jump back on the bandwagon yet despite the horrible record at Eden Park – 19 straight defeats to the Kiwis – so many dared to believe that this could be the day history was made.

It was not to be.

If anyone thought Caleb Clarke’s 11-minute cameo last week was a fluke, the performance of the All Blacks winger on Sunday was three times as good. His 123 metres from eight carries did not paint the full picture as he bumped off Wallabies defenders like a 16-year-old playing in the under-10s. 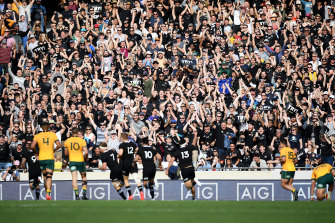 The All Blacks faithful cheer a Sam Cane try.Credit:Getty

The inevitable comparisons to Jonah Lomu are absolutely valid after two sensational showings.

Referee Angus Gardner, under enormous pressure after a howler last week, avoided major scrutiny and handled the occasion with aplomb as the second non-neutral Bledisloe referee in 40 years.

Kiwi hooker Dane Coles, back in the starting side, shoved Taniela Tupou early on after the big prop coughed the ball up. It was a not-so-subtle message that the All Blacks meant serious business. 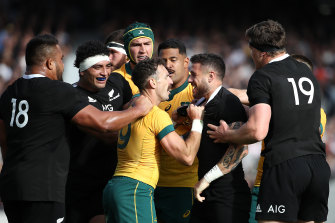 The All Blacks came out fighting after a week of criticism followed last week’s draw in Wellington.Credit:Getty

A brutal breakdown battle ensued and the Wallabies’ cleanout accuracy still wasn’t where it needed to be as Ardie Savea swooped to save a likely try on his side’s line.

However, this wasn’t Australia’s primary concern, with missed tackle after missed tackle allowing New Zealand to eat up easy metres and throw out the visiting side’s defensive line.

Many were one-on-one, against supremely fired-up players in black jerseys, but the contrast to last week in Wellington was alarming.

In the first half alone, Australia missed 23 tackles to New Zealand's 10, and by full-time that statistic climbed up to an ugly 40 to 23.

Beauden Barrett is arguably the most potent player in the world from unstructured play and his return at fullback was profound, while New Zealand’s back-row trio were simply outstanding on both sides of the ball.

Halfback Aaron Smith crossed first for the home side in the 22nd minute before new No.6 Ned Hanigan burst through an All Blacks brick wall to get the Wallabies on the front foot.

A few phases later and Marika Koroibete had dotted the ball down on the left edge to ultimately make it 10-7 at half-time.

Hanigan is as polarising a figure among as they come Australian rugby fans but his performance, with more diamonds than rocks, vindicated Rennie’s left-field selection.

There was injury drama for Australia, with Matt To’omua forced from the field just before half-time due to a dodgy groin. Jordan Petaia was thrust into the Test cauldron for the first time since last year’s World Cup quarter-final and was evasive without being a standout.

As they do so often, New Zealand barged out from the break and absorbed the energy of an Eden Park crowd who resorted to booing the Wallabies at times when they were simply in possession of the ball.

Normality has been restored, with the next move Australia’s in a fortnight in Sydney.

Howley reveals the turmoil behind betting scandal that shocked rugby