France are back in front!

The Wallabies were awarded a scrum about 35 metres out from their own line soon after the restart but the French won a penalty.

Jaminet did the rest.

The Wallabies will have to pull off another miracle to clinch the series with a game to play.

It’s going down to the wire

The Wallabies are in front!

He’s played the best Test of his young career tonight and the Brumbies five-eighth just slotted another penalty goal to put the home side in front with five minutes to play.

We have another tense finish on our hands.

A brilliant Noah Lolesio inside ball on about halfway put Tom Banks through a hole, he found Andrew Kellaway and the replacement winger put Michael Hooper over in the left corner.

That’s the best attacking passage the Wallabies have pieced together in 150 minutes of rugby this season.

Len Ikitau didn’t make his debut off the bench last week but he’s been thrown into the centres with 13 minutes to play in place of Matt To’omua.

And the Wallabies are up against it.

France have dominated the second half. They’ve now opened up a nine point margin thanks to the boot of Melvyn Jaminet.

How are the fingernails?

Let’s see if he can do the same in place of Jake Gordon tonight.

With a capacity of 30,000 and only 75 per cent allowed due to COVID-19 restrictions, it’s not the worst crowd for a Tuesday evening in Melbourne.

Who is going to break this game open?

Next try wins for mine. 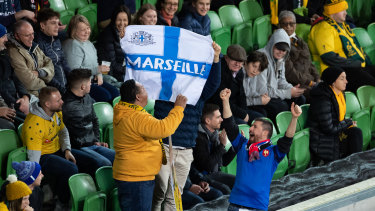