The Warriors are so incensed at attempts to stage a Kiwis Test match in New Zealand before their own long-awaited homecoming that the club will consider not releasing its players for the international fixture.

The Warriors are scheduled to play their first match on home soil in 2½ years when they host the Wests Tigers in their round 16 clash at Mt Smart Stadium on July 3. The game has been hyped as the most significant in Warriors history given the amount of time the team has spent away from home to keep the NRL competition going.

Meanwhile, the NZRL is keen for the New Zealand national team to take on Tonga in a Test match just a few weeks beforehand, during the stand-alone representative weekend on which State of Origin II is played. Now that the New Zealand borders have reopened, NZRL officials are exploring the feasibility of playing the match on home turf.

Such a move would infuriate the Warriors, who believe the event would detract from the celebrations they have planned for their homecoming just a few weeks later.

Warriors CEO Cameron George declined to comment, but sources familiar with the situation at the Warriors are so incensed that consideration is being given to not releasing their players if the international proceeds in New Zealand.

That would be a hammer blow for the Test given that more than half-a-dozen players – including Tonga’s Addin-Fonua Blake and Kiwi-eligible stars Shaun Johnson, Dallin Watene-Zelezniak, Tohu Haris, Ben Murdoch-Masila, Kodi Nikorima and Jesse Arthars – would be in the frame for selection.

The Kiwis haven’t played an international match since taking on Great Britain in the second Test in Christchurch in November 2019.

“It’s definitely our intention to get onto the field one way or another in June for both the Kiwis and Kiwi Ferns,” said NZRL CEO Greg Peters. 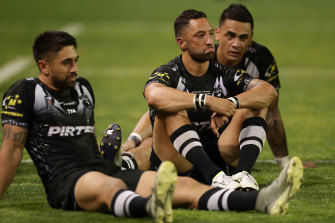 Sitting it out? Shaun Johnson could be one of several Kiwi players not released for Test duty.Credit:Getty

“At the moment we’re still working through what that looks like with the NRL, but we’re certainly intending to play then.

“Obviously there’s an attraction in playing at home in front of your fans and the families of the players is compelling, but that’s only very recently become possible.

“There’s still a lot more work to be done on that. The intention was to get on the pitch in June in Australia, but we’re still working through the details.

“There are still a number of options, we haven’t landed on anything. We just want to get on the pitch in June and we need to because it’s two years since the Kiwis played.”

Peters said it was the organisation’s “strong preference” to play at home if possible. Asked if that would cut across the Warriors’ plans, he said: “It will be a big month if we can pull it off, but it’s very much still up in the air at the moment.

“It’s a somewhat different fan base. There’s the sea of red if we play Tonga and a number of those are Warriors fans obviously, but I think it’s a different proposition.

“There’s some crossover, but it’s a different fan base.”

The Warriors, however, would take a dim view of the spotlight being taken off their homecoming. The team has set up a home base in Redcliffe after stints in Kingscliff, Tamworth, Terrigal, Robina and Surfers Paradise over the past three seasons due to COVID-19.

The Warriors have expressed a hope the NRL can come to an arrangement that would allow them to play additional home games in 2023 to offset the fact they have been on the road for so long.

Panthers bailed out by the usual suspect

Souths want Burgess back, but not yet