Home » Rugby » ‘We are not doing a review’: Dons backed Rutten even before win

Essendon president Paul Brasher backed coach Ben Rutten when he spoke at the pre-game function at Marvel Stadium, hours before the undermanned Bombers roared home in the final quarter to upset Hawthorn in a much-needed boost for the club.

Brasher revealed Rutten and football manager Josh Mahoney had been grilled at a board meeting held last Wednesday about the football program and the team’s performance in the opening seven rounds, a period that yielded just one win. 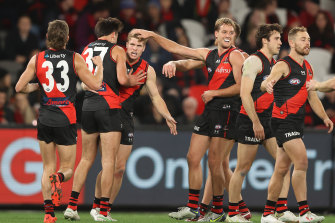 Essendon charged home to defeat Hawthorn relieving some pressure on the clubCredit:Getty Images

He said the club was not going to bow to pressure and conduct a review during Rutten’s second official season as coach, reminding those at the president’s function the coach had taken a young team to the finals in his first season after succeeding John Worsfold as coach.

“We are not doing a review, but we are constantly examining and challenging every aspect of our football program, being brutally honest about where we are falling short and looking for ways to improve, not just in the short term, but as a basis for the team we are building,” Brasher said.

He said that Rutten and Mahoney had outlined some of the adjustments they were making to the program, describing them as not dramatic but ones “aimed at getting the players to play with the same confidence and flair they showed last year.”

Despite losing five players in the 24 hours leading into the game through illness, the Bombers showed that flair and resilience to put in a much improved performance, kicking 8.2 in a dramatic last quarter to run out 27-point winners over the Hawks.

Peter Wright kicked six goals as the midfield attempted to kick the ball more and move it quickly into the forward 50. The team revealed that method and spirit were as important as personnel after some at the club had used the unavailability of key players as excuses early in the season.

Brasher said the journeys of Melbourne and Richmond could be seen as blueprints for team to not panic when the progress was not being reflected in wins and that good clubs showed an ability to shift and adapt to circumstances.

“They [Richmond and Melbourne] came through it by showing courage in the face of massive external noise and belief in and support for their coaches and football program. We will do the same.” Brasher said.

Rutten said after the game he was proud that Jordan Ridley, Jake Kelly, Matt Guelfi, Alec Waterman and Sam Durham had shown the maturity to declare themselves unavailable due to illness. He also praised Devon Smith, Brayden Ham, Kaine Baldwin, Brandon Zerk-Thatcher and Aaron Francis, who replaced them, and even Alastair Lord who sat on the bench as medical sub for “playing a role”.