North Melbourne have selected boom South Australian teenager Jason Horne-Francis as the No.1 pick in the national draft.

Horne-Francis, 18, is an explosive, goal-kicking midfielder in the Patrick Dangerfield mould who has been playing senior football for South Adelaide for a season-and-a-half, including a starring role in a SANFL preliminary final. 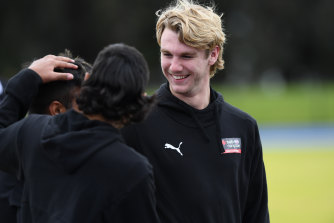 The Kangaroos took their full five minutes to pick Horne-Francis as a pair of pick trades were lodged, and the South Adelaide product revealed his screen had “shut off” while he and his family nervously waited for North Melbourne to confirm the selection.

“It was a bit weird, the TV sort of just shut off and we couldn’t see much,” Horne-Francis told Fox Footy. “Luckily Ben, my manager, took us up to his phone and luckily we were able to watch it.”

The prime pick, who is the stepson of former Port Adelaide player Fabian Francis, added that he was excited to join the Roos’ on-ball brigade.

“North are [heading] in the right direction and we’ve got a lot of young talent and young midfielders … it’s going to be really exciting.”

Horne-Francis is expected be ready to play for the Kangaroos, who had the No.1 pick due to finishing 18th in 2021. North won four matches and have an improving list under coach David Noble.

Greater Western Sydney placed a bid on Sam Darcy with pick two, but the Bulldogs were quick to match it and confirm their prized father-son as a third generation Dog.

Darcy, an athletic, 205-centimetre tall, can play at either end of the ground but turned heads as a key forward in the early stages of 2021, particularly through a six-goal display against Vic Country in a state trials match.

He is the son of 226-gamer Luke and the grandson of David, who played 133 matches for the club.

Darcy said he was relieved and proud to officially head to the Bulldogs after a year of speculation on where he would be selected.

“It’s been a long road this year, a lot of speculation, but I’m just glad to have my name finally read out.

“Having Dad and Grandpa play at the club, it’s just a very proud moment and pretty surreal to finally be joining the boys.”

The tall also revealed he recently joined Bulldogs coach Luke Beveridge for dinner to discuss his future at Whitten Oval.

“It’ll definitely be one of my goals to play AFL footy next year, but I don’t think the club will have expectations for me. I’ll work hard and try to build some size over the summer,” Darcy said.

The Giants, then with pick three, resisted the temptation to make another bid – this time on Collingwood father-son Nick Daicos – and instead opted for the smooth-moving Finn Callaghan, who established himself as a reborn midfielder in 2021.

Callaghan told reporters he was particularly eager to join Josh Kelly in the Giants’ engine room.

“I’m looking forward to meeting Josh,” Callaghan said. “He’s someone I’ve watched this year pretty closely and I’ve tried to model my game a little bit around him. It’ll be great to meet him and learn as much as I can off him.”

Gold Coast made the much-anticipated bid on Daicos with pick four. The Collingwood father-son is arguably the premier player in this draft pool and the club would have been pleased a bid was not placed on their precocious talent earlier, as it reduced the number of draft points needed to match it.

Daicos will don number 35 at Collingwood – the jumper made famous by his father Peter – after Ollie Henry decided to pass it on.

“I am super excited to don the 35,” Daicos said. “It has obviously got a lot of meaning at the club.

“It fits well. I was fortunate Ollie came and handed me over the 35.”

The star midfielder was unfazed by being selected as low as pick four, with his focus purely on performing for the club.

“It has just been a childhood dream to go as high as I can,” he said. “Tonight that was pick four, so it is awesome for me. I’m super proud and I hope I have done my family and friends proud tonight.”

The Suns then pounced on Mac Andrew with pick five, who despite standing at 201 centimetres tall, plays like a fourth midfielder when deployed in the ruck. At only 74 kilograms he is more likely to start his career as a forward, but could form a tantalising trio with Ben King and Mabior Chol in the years to come.

“You watch them play, you watch some of the stuff they do, just how athletically gifted they are,” Andrew said. “It will be good to line up alongside them.”

Josh Rachele went to Adelaide with pick six and Hawthorn selected Josh Ward with pick No.7. Jye Amiss went to Fremantle at pick eight and Josh Gibcus to the Tigers at nine. Neil Erasmus rounded out the top 10, going to Fremantle.

The Saints picked up Nasiah Wanganeen-Milera at 11, before West Coast sent pick 12 to Port Adelaide in exchange for pick 14 and a future second-rounder. Port then picked up Josh Sinn at 12, Essendon took Ben Hobbs at 13, and West Coast used No.14 to select Campbell Chesser. Leek Aleer went to GWS at 15, Darcy Wilmot to Brisbane at 16, Tom Brown to Richmond at 17 Angus Sheldrick to Sydney at 18 and Jacob van Rooyen to the reigning premiers Melbourne at 19.

Kai Lohmann rounded out the first night of the draft, going to Brisbane at pick 20.

A swap of picks between North Melbourne, the Western Bulldogs and Geelong went through before the first pick was announced.

The draft continues on Thursday night.