Home » Rugby » We lost $50m in a decade: Why Panthers still can’t realise their potential

The Penrith Panthers have lost $50 million in the pursuit of success over the past decade. When it finally arrived last year, which has resulted in back-to-back grand final appearances, COVID has prohibited them from capitalising.

Panthers Group chief executive Brian Fletcher told the Herald that the football club has missed out on an estimated $4 million windfall in 2021, compounded by a similar impact the previous year. 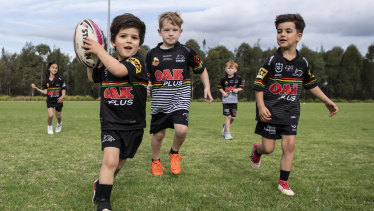 There are plenty of young Panthers fans who haven’t been swept up in the traditional grand final fever due to COVID restrictions.Credit:Wolter Peeters – Sydney Morning Herald

“We’ve been through all the heartache. In the previous decade prior to us being successful last year, we had lost $50 million in our rugby league program. When you go through the balance sheet, it averages around $5 million a season. That’s in development and some bad decisions.”

The silver lining of selling $280,000 worth of merchandise in the 24 hours after qualifying for the grand final is nullified by a concern that the inability to completely connect with the community may see the club fail to turn a generation of young fans into lifelong tragics.

The cost is yet to be counted about how much they’ve lost in creating a new legion of fans given they’ve been playing away from home or in front of limited crowds for the past two years. 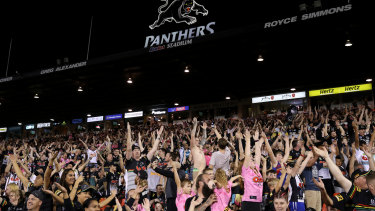 Thousands of fans have been locked out of Panthers Stadium during the club’s golden run over the past two seasons.Credit:Getty

It has severely reduced the team’s footprint in the community at a time when stars like Nathan Cleary and Jarome Luai have become local heroes.

“We have had two years when we could have replenished 20 to 30 per cent of that $50 million we lost, but COVID has hit,” Fletcher said.

“Everyone has suffered from COVID, we’re not on our own, but the timing meant we haven’t been able to capitalise on a period that normally sets clubs up for years and years. You just can’t beat success. It’s the best marketing tool in the world.”

Since COVID-19 changed the world at the beginning of last year, the Panthers have lost just six of the 49 games of rugby league they have played. 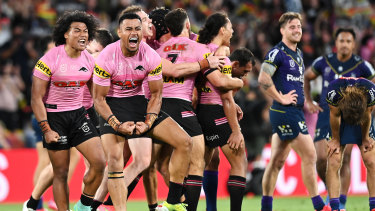 Mt Druitt residents Brian To’o and Stephen Crichton were animated after their win against Melbourne. Credit:Getty

On Sunday, they will play in their second straight grand final, transforming home-grown talent into household names on the back of their infectious style of football.

However, the club’s phenomenal record hasn’t translated in the off-field success most teams would enjoy as a result.

Even before the competition was relocated to Queensland in July, all seven of their home games were sold out against the mandated capacity by the NSW government, leaving a combined 35,000 fans locked outside the gates.

“We were sold out every week,” Fletcher said. “We’ve never had this opportunity in our lives, but we can’t even capitalise on it. We’ve had restricted crowds at a time when people are desperate to come watch the Panthers.”

“We’ve never had this opportunity in our lives, but we can’t even capitalise on it.”

“We’re fortunate that we are in a good financial position and that we have got a good football side. It could be a lot worse if we were down the bottom of the table.

“We have a good chairman in Dave O’Neill and a stable board. Having that at this time is invaluable when there is so much uncertainty about the world. All the results are driven from the people at the top.”

The Penrith Junior Rugby League is the largest nursery in the world. The majority of the Panthers’ current top 30 squad came through the system.

For a club that relies so heavily on developing local talent, there is a fear what almost two years without rugby league will have on the progression of its players. The impact will be felt from the club’s fringe first grade players right through to the under 5s. 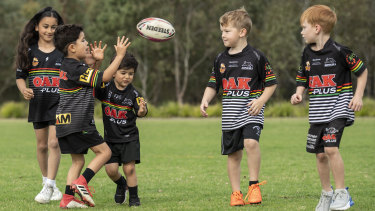 A group of young Panthers fans throw the footy around at a field in Glenmore Park.Credit:Wolter Peeters – Sydney Morning Herald

“We have 8900 playing in our junior rugby league,” Fletcher said. “It’s the biggest district in the country. Imagine how much more we’d have if COVID didn’t hit. The spin-off effect is so wide-reaching.

“It’s moments like this that you turn young fans into lifelong diehards. Unfortunately, they haven’t got to experience it to the extent it should be.

“They haven’t got the chance to play at Panthers Stadium or come face-to-face with their heroes. Some clubs wait years in between grand finals. It’s important that when you have success you maximise it. Unfortunately, the situation has prohibited us from doing so.”