Home » Rugby » ‘We would cripple the game in this country’: Rennie says Wallabies must let Koroibete go

If Rugby Australia set a precedent and matched the money offered to Marika Koroibete in Japan, it would cripple the code.

That’s the view of Wallabies coach Dave Rennie as the race for the superstar winger’s services beyond this season heats up. 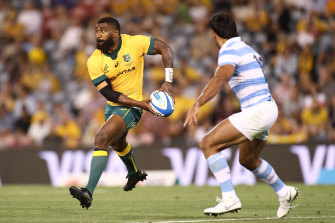 Marika Koroibete is all but certain to leave Australian rugby at the end of the year.Credit:Getty

The Herald earlier this month revealed the $1 million deals on offer for Koroibete abroad are almost double what is on the table from the Rebels and RA.

That will almost certainly see the former John Eales Medallist lost to Melbourne. But In Rennie’s eyes, matching the money on offer abroad would be irresponsible.

“Marika has been here for a few years. He’s done his time,” Rennie told the Herald. “Yeah, sure, we can still pick him and he can go for a period of time and come back. But what we can’t do is try and match the money in Japan.

“We can’t get close to it. If we did, we would cripple the game in this country. We have to be smart around that.

“There are a lot of previous contracts that this time around, are being hauled back in. That’s the world we live in.”

However, it may not be the last Australian rugby fans see of Koroibete in a Wallabies jersey.

Rennie has the option to recall two players with less than 60 Test caps experience under the modified Giteau Law and a player of Koroibete’s calibre is hard to ignore.

“There’s been a couple of games he’s played this year where he’s been the best player on the field and you’ve only got to reflect back to the Bledisloe Cup game in Brisbane – he was sensational that day,” Rennie said.

“We’d love to keep him, but that’s the challenge we face. Japan’s market is just going berserk, it’s not just the elite but some fringe guys and guys who would be battling away in Super Rugby over here, they can earn three or four times what they would be paid [in Australia].

“That’s why we’ve got to make the Wallabies jersey something the guys are desperate to get.”

Wayne Pivac reveals there have been 'two or three' coronavirus cases