Home » Rugby » Week on from cutting face in Origin, Cleary to wear stitches in NRL return

Nathan Cleary will still wear the stitches which held together his gruesome State of Origin head cut when he makes his NRL return as he braces for a torrid test from Blues hopeful Angus Crichton.

The NSW and Penrith No.7, who was still sporting a red eye on Wednesday from a deep facial wound suffered during the Blues’ record-breaking game one win a week ago, brushed off any concern he won’t be 100 per cent for the blockbuster against the Roosters on Friday night. 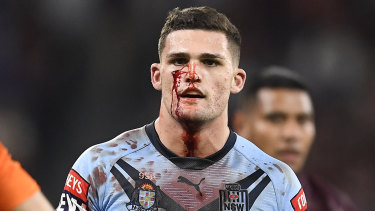 Nathan Cleary is likely to still wear stitches for his NRL return for the Penrith Panthers. Credit:Getty

Cleary was one of only a couple of minor concerns for NSW coach Brad Fittler out of the series opener, with captain James Tedesco skipping the Roosters’ nail-biting win over the Titans with a hip pointer injury. He is expected to line up against Cleary and the Panthers at BlueBet Stadium on Friday night.

Penrith’s State of Origin stars Cleary, Jarome Luai, Isaah Yeo, Brian To’o and Kurt Capewell are all expected to return to NRL action, alongside Liam Martin, who featured against the Sharks after playing 30 minutes in Townsville.

Martin is locked in a battle with Roosters star Crichton for a game two spot after the latter missed the thumping game one win due to suspension.

“He’s big, strong, mobile so he’ll be fired up and ready to go,” Martin said. “I’m sure he’ll be putting his best foot forward and it will be interesting.

“Getting that taste [of Origin], it’s an arena I want to be in. It’s such an incredible experience. Once you get that sky blue you don’t want to lose it. I’ll be doing everything possible to try to secure my spot, but I’ll leave that to Freddy and he’ll make the right decisions.”

Martin could even directly oppose Crichton as Penrith coach Ivan Cleary juggles his back-rowers with Viliame Kikau to miss the match through injury.

But Nathan Cleary was in no doubt he’ll be in for a stern test defending the NRL’s form edge back-rower, who was considered a shoo-in for NSW selection before his two-game ban.

“Angus is one of the best line runners in the game whereas Marto brings that aggression where he can get under peoples’ skin so I guess they’re a little bit different,” Cleary said. “They’re both great players.

“I knew how much it meant to [Martin] and his family and he couldn’t get the smile off his face [after his debut]. Angus will be out there trying to get back into the Origin team and, of course, he has to be up against me, so I’ll be the one tackling. That will be a good challenge.

“As much as it’s a mouth-watering individual battle, I’m sure Marto will be doing everything he can to get a team win.”