Home » Rugby » ‘Welcome to the NRL’: Bennett hits back at Cleary’s poaching claim

Wayne Bennett has warned the Panthers and coach Ivan Cleary they had better get used to rival clubs trying to woo their best players.

Cleary on Wednesday took a swipe at the Dolphins, who are in the process of putting together their roster ahead of their NRL debut in 2023, when he said they were “treating our club like their backyard”.

The Dolphins have already signed Penrith SG Ball premiership players Isaiya Katoa and Harry Hassett for next year, while they have also pinched Rob Jennings, made an unsuccessful pitch for Sunia Turuva, and offered rookie-of-the-year contender Taylan May a three-year deal before he opted to stay put on a two-year deal for less money.

Bennett told the Herald he knew firsthand from his two decades at Brisbane how difficult it was to retain all your top talent, and if anything the premiers should have been relieved they had “finally tapped in to what they haven’t tapped in to for 20 years”.

“All of us have to remember we get our players from somewhere, and why wouldn’t you take them from the best clubs you possibly can if you can do that?” Bennett said on Wednesday. “There’s a reason they are the best clubs, because they have the best players.

“They won the under-19s, they win this, they win everything. There are good kids there. And they need opportunities. 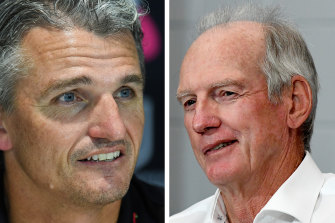 Wayne Bennett has hit back at Ivan Cleary’s subtle dig about recruitment.Credit:Getty/NRL Photos

“I know from experience that sometimes you have to let them go because you can’t keep them all. It’s that simple. And if he [Cleary] wins another premiership this year, he will find it even worse. Everyone wants more [money], nobody comes in to sign a contract and asks for less.

“I coached the Broncos for 21 years, there was no-one under more pressure than we were at the height of our fame. And when I came back and had another four years, there were plenty of young players who had gone off to play with other clubs. It’s the price you pay with the salary cap.”

Bennett asked if Cleary had “complained about what Canterbury had done to him” by signing Matt Burton and then throwing a monster $3.2 million, four-year deal at Viliame Kikau.

“They’ve taken two of his best players off him,” Bennett said. “Have I heard a complaint there? Is he playing favourites, is he? There’s nobody in the game who wouldn’t want those two in your side. 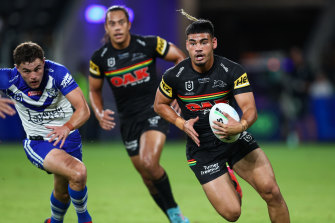 Taylan May was on Redcliffe’s radar before re-signing with Penrith.Credit:NRL Photos

“The game decided a long time ago to have a salary cap so each team would have the same amount of money to spend on players, and distribute the players more evenly across the clubs. That’s what it is about.”

Penrith ace Stephen Crichton is another player who has been linked to the Dolphins, but Bennett said there had been no conversations.

The Panthers have regularly argued there needs to be compensation for clubs with giant nurseries who invest heavily in the next generation, only to lose them to rivals before they reached first grade.

Clubs are entitled to a development fee should a junior sign a deal to be in a rival NRL club’s top-30 squad, but the amount is capped at $50,000.

Bennett supported the concept, but said it was never backed in clubland “because the clubs who don’t have the [juniors] aren’t interested in it”.

“Penrith have finally got it right – it took them 20 years to work out what they had in their backyard,” Bennett said. “Welcome to the NRL. The more you develop, the happier the other clubs are. It doesn’t stop you from doing what you’re doing because it’s the best thing for your club. But it does hurt you.”

Cleary, whose young side sits four points clear on top of the NRL ladder and travel to Newcastle on Sunday, said there were challenges trying to retain all their talent, but it was “part of our mandate” to keep bringing the juniors through.