Canterbury chief executive Aaron Warburton said Kyle Flanagan only fronted the media after assuring club officials he was comfortable doing so and that the halfback’s emotional appearance underscored his commitment to fulfiling his potential at the family club.

Flanagan broke down in tears during the Bulldogs’ media day on Tuesday, showing the strain from being benched during the loss to the Dragons. Just hours after his interview, Flanagan was dropped altogether from Trent Barrett’s 17-man squad for Magic Round. 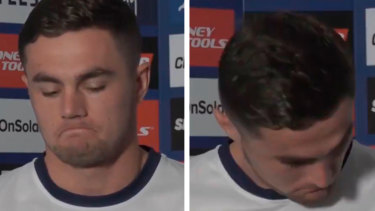 Kyle Flanagan at a press conference on Tuesday.Credit:Fox Sports screengrab

“It’s not the first time or the last time in footy that someone gets dropped. We’re just making sure that he’s in a good headspace, that is key.”

Flanagan joined Canterbury with much fanfare, but has struggled to live up to expectations. The Bulldogs have been criticised for letting Flanagan front the media given that he wasn’t going to play this weekend. However, Flanagan informed officials he was “comfortable” with the all-in interview, according to Warburton.

Asked if Flanagan knew he was going to be dropped before the teams were officially announced at 4pm, Warburton said: “I’m not sure. I’m not sure the exact conversation Trent had with him or anyone else around team listings and whatnot.

“He won’t be the first or last halfback to be dropped from a team to go back and work on whatever he and the coach talked through to help their team get out of the space they are in.

“What stole the headlines was that he was emotional and that’s Kyle. He’s a pretty resilient guy.”

Warburton said the way Flanagan choked up when speaking about the bond with his father, premiership-winning coach Shane Flanagan, was a pointer towards his quality as a person and player.

“It was so special,” Warburton said. “I looked at that personally and thought he knows what he needs to work on and that means a lot to him.

“That’s the type of player who will know what to do and get out of it.

“You talk to me about what drives me and it’s family. Like most people, that’s who you want to make proud. That’s a very special part of what drives Kyle.

Flanagan, who picked up a rib-cartilage injury at half-time in the loss to the Dragons, will make way for a Jake Averillo-Brandon Wakeham halves pairing against the Raiders on Saturday.

‘Delicate decisions’: Jackson set to return but Viney to miss for Demons

Wales vs Scotland: Six Nations game postponed due to coronavirus