Home » Rugby » ‘What else do we use?’: Ella calls for common sense on Aboriginal flag ban

One of Australia's iconic Indigenous Wallabies, Glen Ella, has implored WAM Clothing to allow Rugby Australia use of the Aboriginal flag on its latest Indigenous jersey.

The 2020 edition of the Wallabies First Nations jersey was released earlier this month but does not feature the iconic flag, which has become the source of a copyright feud since WAM last year issued national sporting bodies cease and desist letters. 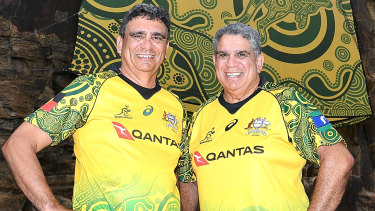 Gary Ella and Glen Ella with the First Nations jersey in 2017.Credit:Getty

Ella, who helped launch the inaugural Indigenous jersey alongside his brothers and Kurtley Beale in Brisbane in 2017, told the Herald the absence of the Aboriginal flag on the new Wallabies jersey was "disheartening".

"We’re proud of who we are and we want to represent our country and our people," Ella said. "Not being able to use the flag, as I keep saying, is very disheartening. 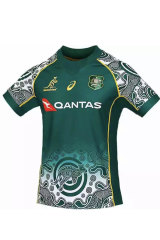 "It’s been a symbol of Aboriginal people and their struggles for many years. I was there that day and I helped promote the original jumper [in 2017]. It was an historic day.

"To have the then Australian Rugby Union use that on their national jumper – you can’t buy that."

While the hugely popular jersey nets Rugby Australia millions in sales every year, Ella dismissed the notion sporting bodies – not just RA – are being greedy in refusing to pay WAM 20 per cent of all sales which feature the flag.

"What else do we use? As Aboriginal and Indigenous people, we need to be able to use that flag.

"I understand that people make a lot of money from selling those type of things but, in terms of the national perspective and Test matches and things like that, you should be able to use the flag."

Rugby Australia has also been barred from using the flag on National Indigenous Schools and Ella 7s tournaments, which form a significant part of the code's Indigenous, grassroots involvement.

The Herald has learnt that is because WAM asks for a flat fee, rather than a percentage from sales, if the flag is used on products that are not sold to the public.

The Reds and Brumbies will square off in their Indigenous kits at Suncorp Stadium on Saturday.

Reds backs Moses Sorovi and Bryce Hegarty showcased the Queensland jersey, which also doesn't have the Aboriginal flag on it, on Monday.

"The handprint on it represents family and all of the dots around represent connection and connecting the dots to the community, connecting to your family and as Reds, it really resonates quite well with us," Hegarty said.

"That's something we have based our season around. It's a great jersey.

"We had a call with [jersey designer] Shelly [Booth] today and it was really special to here what made her make this jersey and to see things that really meant a lot to her and her family."

Miami Heat haven’t played a 'complete A+ game together' yet, says Andre Iguodala
Recent Posts
This website uses cookies to improve your user experience and to provide you with advertisements that are relevant to your interests. By continuing to browse the site you are agreeing to our use of cookies.Ok