Home » Rugby » Why NRL teams are scared of the bogeymen

Like political parties, the NRL has an elite eight where everyone has a dreaded rival, as well as someone else they enjoy dominating.

As the play-off bound teams enter the final round of the regular season, these personal battles threaten a re-ordering of the positions on the finals ladder.

The bogey team meetings begin on Thursday when the fifth-placed Eels host perennial finals club the Storm. Parramatta have beaten Melbourne in their previous three clashes, with Storm coach Craig Bellamy agreeing – after a 28-24 loss in golden point time in late March – that the Eels have the wood on his team.

The Eels are also a threat to minor premiers Penrith, who lost to them in 2020, their grand final year, as well as twice this year. The Panthers won their 2021 semi-final 8-6 but survived only via a mistake by the Parramatta dummy half on the last play of the game. Should the Eels defeat the Storm on Thursday, Parramatta will jump to fourth place and meet the Panthers in the first play-off weekend.

On Friday night, the sixth-placed Roosters host the seventh-placed Rabbitohs, who have beaten them on each of their past four meetings. But the Rabbitohs have a bete noire of their own, the Storm. Melbourne have won six of their past seven games, although admittedly Souths were victorious at their most recent meeting, a 24-12 victory in round 19.

On Saturday night, the Cowboys host the Panthers, who are expected to rest players before the finals. 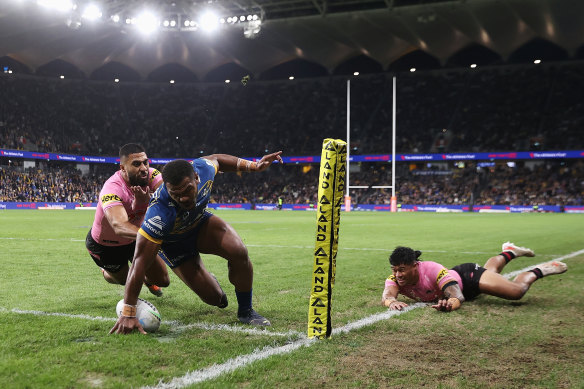 Unlike most teams in recent years, the Eels often get over the line against Penrith.Credit:Getty

But a bogey team likely awaits the Cowboys in the first finals weekend, in the form of the Sharks. Cronulla have won the past five times they’ve played, including a 26-12 win away in round 18. The last time the Cowboys beat the Sharks was round one, 2018. Should the Cowboys be forced to play the second week of the finals, they would like their chances against the currently eighth-placed Raiders, who they have beaten on the past three occasions. But the Raiders have the wood on the Sharks, winning the previous eight games between the clubs. The Roosters have also beaten the Sharks in their past six encounters

While Parramatta have it over the Panthers and Storm, they can’t beat the Rabbitohs. Even when the Eels were winning premierships in the 1980s and Souths were struggling, they tested the Eels. In recent years, the domination has been pronounced, with the Rabbitohs winning their past six games by big margins.

The Panthers have the wood on the Roosters, winning their past six matches. The Raiders also have a problem with the Panthers, who have won eight of their previous 10 games. Canberra coach Ricky Stuart will be pleased the NRL abandoned the McIntyre system, where team one played team eight.

So, each of the top eight teams has a hoodoo team and, in turn, has the wood on someone else. The Panthers hoodoo is the Eels but they have it over the Roosters and Raiders. Yet these latter two can beat the Sharks who, in turn, trouble the Cowboys.

The Cowboys would favour themselves against the Raiders. The Storm’s bogey team is the Eels, and they beat the Rabbitohs, but it’s the reverse for the Eels, who also trouble the Panthers. While the Roosters have two nemeses in the Rabbitohs and Panthers, they trump the Sharks. The Raiders have voodoo teams in the Panthers and Cowboys but also beat the Sharks.

Sometimes this domination comes from tactics, such as when a team uses a strong territorial kicking game allied with a rushing defence to keep a team trapped in its own half.

Some say it’s luck. After all, the origin of the distinctly Australian and New Zealand expression “having the wood” on someone dates from touching wood for good luck. Team of the Century coach Jack Gibson took it further by attributing a club’s failure to “something in the woodwork of the joint”.

The long-term streaks, enduring despite changes of coaches and player rosters, suggest a psychological reason.

On the eve of matches between two clubs, where one has shown dominance over the other, or when the warring politicians meet, it becomes a double whammy. The winner calls up past victories. The loser calls up past defeats. Both become self-fulfilling.

Mako Vunipola: England prop says no one in Eddie Jones’ squad is assured of their place