Brandon Smith is a few weeks away from officially becoming a Rooster, but his exit from Melbourne could not come fast enough for both parties.

The man known as “Cheese” is already adjusting his attitude, telling those close to him he knows he needs to lose the blond hair or he will be offside with Roosters chairman Nick Politis from the start.

There may be denials, but Smith had worn out his welcome in Melbourne, to the point where Storm coach Craig Bellamy didn’t even mention his name when paying tribute to departing players during his final media conference of the year following the loss to the Raiders in round one of the finals.

Smith – a New Zealand international and the man once tipped to take over Cameron Smith’s famous No.9 jersey for the long term – was grouped with the “others” leaving the club. Bellamy talked about the departing Felise Kaufusi and heaped praise on the Bromwich brothers, Jesse and Kenny. Smith – arguably the club’s biggest star after Cameron Munster – didn’t rate a mention.

Bellamy has not been keeping it to himself that he was less than thrilled with Smith this season. It began with the white-powder incident following last year’s grand final, moved to the next level after Smith’s swearing and declarations about what a great club the Roosters were on a podcast, stepped up again with his interrupting of teammates’ interviews with questionable language, and came to a head after he called referee Adam Gee a cheat and was banned for three games as a result.

Smith’s day-to-day approach left many at the club unimpressed, so it’s no wonder Bellamy – a stickler for discipline and a lover of players with a team-first attitude – had had enough. In his post-match press conference, hidden among his praise for the Bromwich boys, was a clear message. 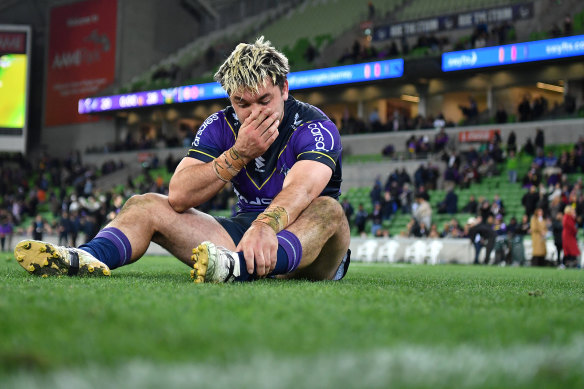 The Roosters have high hopes for Brandon Smith.Credit:NRL Photos

“They’ve done unbelievable stuff for this club,” he said. “Especially as they’ve got a bit older as well. You know, they’ve been our leaders this year and it’s not an easy job taking over from guys like Cameron Smith and Cooper [Cronk] and Billy [Slater]. Those sort of guys, the club’s always been their No.1 priority, not themselves, and I think that’s, that’s probably the No.1 trait when you’re looking for leaders.”

Clearly, Smith was not held in that regard by Bellamy.

The Roosters have made a significant investment in Smith. They let grand final winner Sam Verrills go as they guaranteed Smith the hooking role. It’s a gamble on and off the field but, at his best, there is no one more damaging than Smith. It’s going to be a wild ride though.

ARL Commission chairman Peter V’landys has hit back at clubs and groups in the game he says are trying to undermine him through “personal attacks” that are “misleading and opportunistic”.

V’landys has also taken a shot at the bloated AFL in a stinging return of serve to an item in this column last week.

V’landys is being hammered by club bosses about everything from the AFL’s mammoth $4.5 billion broadcast deal to the state government’s change of heart on stadium funding, and even his explanation for delaying Taylan May’s two-game ban to next year, saying it was “for the fans”.

V’landys has sent this column an email promising to have the last laugh, while laying out what he says are the huge benefits to clubs and players that have resulted from the recent work of the commission.

“In 2019, the 16 NRL clubs as a group recorded $38 million in losses,” he wrote. “During COVID, when the NRL increased net funding to clubs from $29 million to $86.4 million, it meant that the 16 clubs as a group made approximately $30 million in profit when other businesses and sports were incurring heavy losses. This was on top of the $144 million per annum the NRL paid the players on behalf of the clubs.

“For the next five years we have proposed a 140% increase in funding to clubs as compared to 2019. It’s expected players are going to receive a 19% increase, 12% adjusting for expansion. Not bad considering most employees are on average receiving a 3% increase.

“Yet a minority, rather than being appreciative, are demanding more. However, what is disappointing is they have a strategy to personally attack me and the NRL in order to achieve their unrealistic demands. The NRL next year will have record revenues and a cost-effective operation, which will make record distributions to players and clubs.

“To single out broadcast in isolation is misleading and opportunistic. Firstly, the AFL’s new broadcast deal does not start until 2025. It finishes in 2031. Before 2025, the NRL will likely have done a new broadcast deal. This will mean more distributions to clubs and players and a cost-effective operation. Also, a substantial part of the AFL revenue goes to operational costs. The NRL operational costs are now 25% of its revenue. In stark contrast, the AFL operational expenses in 2021 were 47% of its revenue.

“Infighting inside the game has always held us back. Attacking the game to achieve a better result for one stakeholder group comes at the cost of the overall game. Ironically, damaging the game will hurt all of us in the future.”

As much as they don’t want to admit it, Manly bosses need Des Hasler, and Hasler needs Manly.

It’s why Scott Penn, at his meeting with Hasler’s agent, George Mimis, agreed to explore the option of a “condition free” contract for 2023 and 2024.

That discussion took place on the Wednesday night. It was only because there was a positive vibe about Hasler getting a contract extension for the 2024 season that the veteran coach turned up for the Thursday meeting.

The decision to back away from that extended offer and only guarantee next year has left the negotiations in no man’s land. 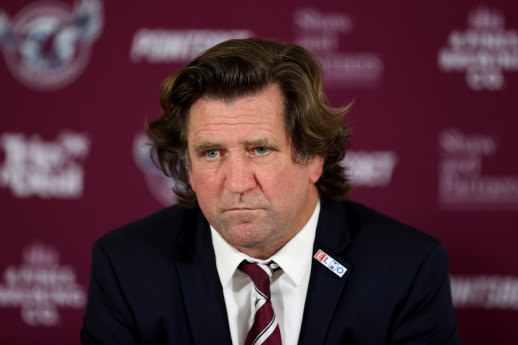 One thing is for certain, the coach won’t allow his players or himself to be subjected to such speculation, which is why he would consider departing. He has coached too long with too much success for that.

Hasler would be a coach in demand if he parts ways with Manly, but he has no real desire to coach anywhere else at this point.

Mitchell moolah too good to be true

Souths officials are chuckling at reports that Latrell Mitchell is so marketable that he is now a $2 million-a-year player – not because they don’t think he is worth big money, but because a year ago the same media group, News Corp, was calling Mitchell all sorts of things after his tackle ended Joey Manu’s season.

And anyone who dared challenge the view that Mitchell was a thug – as this column did – was dismissed as someone who was just buttering up Mitchell to get an interview. We were not allowed to have an opinion.

The attacks were hard to read, but not as hard to fathom as the revelation, to News Corp types, that he is the game’s most marketable player.

Souths know who is talking up Mitchell’s price and why it’s being done. And it’s not his agents. It’s designed to put pressure on South Sydney’s salary cap.

Mitchell is not motivated by money, and never has been. He will be well rewarded when he signs his next deal – he is off contract at the end of the 2023 season – but he is a person who craves respect rather than riches. He won’t be a player who breaks his club’s salary cap and forces others out.

NRL players’ ability to beat the concussion system and either get back early or disguise symptoms has been an issue this week.

There has been widespread confusion about what players have to do to get back on the field, and that’s not surprising because it’s a complex area. The NRL strongly recommends that the “graduated return to sport” strategy should follow current best practice after the initial 24-48 hour rest period.
Once a player returns to their pre-concussion baseline they can then begin a graded return to sport program, which includes:

■daily activities that do not provoke symptoms;
■ light aerobic exercise – walking or stationary cycling at slow to medium pace. No resistance training;
■sport-specific exercise – running or skating drills. No head impact activities;
■non-contact training drills – harder training drills, e.g passing. May start progressive resistance training;
■full contact practice – following medical clearance, participate in normal training activities
■return to play/sport.
It would be typical to have 24 hours (or longer) for each step of the progression. If any symptoms worsen while exercising, the player has to go back to the previous step. When a player is considered for an accelerated return to sport in less than 11 days, additional expert clinical opinion should be used.

Grimes on track to face Cats