Port Adelaide have leapt into the top four after a series of mistakes from St Kilda late in the last quarter as they tried to exit their defence cost them any chance of victory.

After trailing by 20 points late in the third quarter St Kilda managed to work their way back into the game hitting the lead by a point at the 16-minute mark of the last quarter.

They had all the momentum but they could not seal the deal as their skills deserted them with Brad Hill turning the ball over twice when the game was on the line. The Saints did not pay the price immediately but the game had shifted. 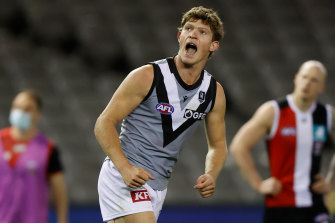 Mitch Georgiades celebrates one of his four goals.Credit:Getty Images

The next time Port attacked Sam Mayes kicked a goal, stretching the margin to seven points, as Ollie Wines led the team to victory with an incredible 36-possession performance that included 19 contested possessions.

St Kilda could hardly believe they had not cashed in on their dominant patch from late in the third quarter but they could not bridge the gap once Port regained the lead with Rowan Marshall – who played very well – missing a set shot from straight in front when he had a chance to bring the Saints back to within a point. 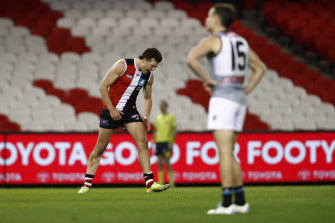 Port forward Charlie Dixon kicked the sealer with less than two minutes remaining to give them a win they deserved. They had the most effective forward in the game with Mitch Georgiades kicking a goal in each quarter to kick four goals for the match and hung in when the Saints were charging.

It was a strange game as the spectre of COVID-19 disruptions closed in on the competition with several six-six-six transgressions and mistakes that would not have been out of place in local football.

There was also an incident late in the first half that led to St Kilda’s Daniel McKenzie being stretchered from the ground when he wore the full weight of Georgiades after he charged in to tackle him and ended up on his back with Georgiades’ forearm accidentally landing into his head.

During the stop in play Port assistant coach Michael Voss summoned the group to the boundary line for an impromptu address with no crowd noise to muffle his instructions.

Nothing however seemed to make much difference to the game despite what was on the line with Port Adelaide able to move into the top four and the Saints hopping into the eight if they won.

It took until midway through the third quarter before the contest began to be played with any urgency after just seven tackles were laid in the first 13 minutes and the teams kicked six consecutive behinds between them.

Port Adelaide had bounced back after a slow start but their lead was still narrow at half-time but they suddenly switched on midway through the third quarter and started to penetrate St Kilda’s defence scoring virtually every time they entered forward 50.

It allowed them to open up a matchwinning lead as the Saints fumbled their chances dropping simple marks and missing gettable goals when they moved the ball forward. Their intent was not the issue but skill level just wasn’t at the level it needed to be when chances arose.

It took the most unlikely of players to break their run of missed chances when defender Jimmy Webster kicked his first goal since 2017 and just the fourth goal of his career to draw them within 14 points of Port Adelaide.

The Saints had come alive but they could not get the job done and even with all the uncertainty surrounding the remaining rounds have a tough job to make the eight while Port will welcome key players back from a position of strength inside the top four.