Home » Rugby » With them or against ’em, the Tigers no longer care

When the long-dormant Richmond Football Club unexpectedly stormed to the 2017 premiership, the Tigers enlisted many neutral football fans in what was a romantic premiership by a hitherto downtrodden underdog.

In the three years that have passed since Richmond's Great Awakening and reinvention, the Tigers have turned the clock back to 1974 or 1975, when they were the Victorian competition's superpower.

Then, as now, they played a territorial game predicated on quick movement of the football, kicking long to Royce Hart, Neil Balme and other talls, with quick and skilful small players – notably the great Kevin "Hungry" Bartlett – swarming forward at their feet to crumb and kick goals. Then, as now, they thrived on the opprobrium of other teams and their supporters.

And, most memorably for anyone with a child's vivid memory of that era, they had an outlaw element, a touch of the schoolyard bully. They didn't play "on the edge" as Tom Lynch and Trent Cotchin do, but well past that era's invisible and probably fictitious line of fairness.

They weren't the only team with a brutal edge in that era, but they were possibly the only club that, intentionally or not, fused that aggression and ruthless approach into the club "brand".

Next weekend, when they travel to Adelaide for a preliminary final, the Tigers will find themselves wearing the (yellow and) black hats again, as if they were facing North Melbourne, then Cinderella without a flag, in the 1975 preliminary final.

The vast majority of those who don't barrack for Richmond, or for the Crows, will be in Port's corner when they sit down on the couch to watch what shapes as a potentially epic preliminary final.

If both Port and Richmond find something close to the best versions of themselves, we're in for another fabled preliminary final.

A decade ago, Brendon Gale and then president Gary March outlined their ambitious plan for the next 10 years ahead, dubbed "0-3-75", which translated to zero debt, three premierships and 75,000 members.

While the Tigers have comfortably exceeded the two off-field targets and are a serious chance to land that unthinkable third flag, they've also – as a by-product of that success – reached another key performance indicator (KPI) that wasn't part of the Gale-March plan.

Richmond are a club that has to earn hatred. Whereas being reviled is a precondition of Collingwood and Carlton, clubs that are innately obnoxious to those outside the tribe, the Tigers are only genuinely resented when successful, and then display the hubristic excess that often accompanies success in team sports.

Outside of themselves and their own "base", they no longer give a fig whether you're with them or against 'em.

Lynch isn't biffing opponents like some 1973-74 Tigers, or even running through an opponent, as Jimmy Jess did in the 1982 grand final when Carlton's courageous Ken Hunter was in his path. 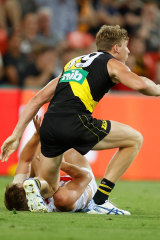 His misdemeanours are mild by '70s, '80s and even '90s standards, but collectively damning today. Ditto for Cotchin, a ruthless player whose mean streak is masked by his talent and boy band appearance.

Lynch was always going to be fined, not banned, for placing a knee on the collarbone of Dougal Howard. Just as he wasn't going to be suspended for the gut punch on Sam Collins of the Suns, for pushing Alex Witherden's head in the turf, nor for his strike on Michael Hurley; individually, none of these incidents were horrendous.

They were unpleasant and certainly have damaged his reputation, as he eclipses Toby Greene for vaudeville villain status on social media.

Where Lynch is fortunate is that the AFL eschewed – wrongly in my view – the philosophy that a series of breaches, like stomach or small jumper punches, or kneeing on someone, should be collated into an eventual suspension.

So he's playing Port, who will be fortified by their fortress and form. But if Port Adelaide are slight favourites in this final, the Power will need to produce an even better level than in that brilliant round 11 game at the same venue, when Port prevailed 13.15 to 11.6.

The Tigers will be bolstered by five good players who didn't play in round 11: Cotchin, the sublime Shane Edwards, Toby Nankervis, Bachar Houli and David Astbury, who can stand Charlie Dixon if Damien Hardwick decides Noah Balta can't cope with big Charlie, or he can support Nankervis in the ruck, as he surprisingly did against the Saints.

Port have the brawnier, stronger bodies around the ball but perhaps less speed. The Tigers might have more punch in attack if they can get it forward. Both teams are superb at team defence – note how the Power were willing to have Tom Hawkins matched with an undersized Trent McKenzie while blocking the corridor and forcing the Cats wide.

To the naked eye, Richmond's game style looks much like 1975 or 1980, with the territory, the quick movement and the improvised quality. But in truth, the plain appearance conceals defensive complexity.

No team has a better method for distributing numbers – out-numbering where needed and outnumbered where it doesn't count as much – than the Tigers.

They also apply pressure on the opposition, in a method that forces their opponent to execute their own offensive game exceptionally well.

If both Port and Richmond find something close to the best versions of themselves, we're in for another fabled preliminary final.

Richmond's season has been storied, containing misdemeanours on and off-field, culminating in the suspensions of Sydney Stack and Callum Coleman-Jones. Dylan Grimes thinks they’ve been galvanised by these setbacks, while Jack Riewoldt separated the team's tainted brand from a "culture" that is about rectifying missteps.

As this high noon beckons, the Tigers are genuinely in a bubble, and not just the locked-down "hub".

Outside of themselves and their own "base", they no longer give a fig whether you're with them or against 'em.

‘I’d had a shocker’: Why Stuart understands the scrutiny Williams faces at Raiders