Home » Rugby » ‘Without a doubt’: Clarkson on whether he’d coach Tasmania’s inaugural team

Four-time Hawthorn premiership coach Alastair Clarkson won’t be coaching anywhere in AFL circles in 2022, but he’s left the door wide open to the prospect of becoming the coach of Tasmania’s inaugural side if or when it enters the competition.

Speaking on SEN’s Jack and Painey with Tasmanian sporting icons Jack Riewoldt and Tim Paine, Clarkson admitted just how attractive the prospect of being involved in a startup club from the Apple Isle would be.

Then, asked categorically by Riewoldt if he’d entertain being the first coach of the inaugural Tasmanian AFL side – particularly if his great mates, and local products, Brisbane Lions coach Fagan or Brendon Bolton were also involved – Clarkson gave his strongest indication yet that “without a doubt” he’d be interested. 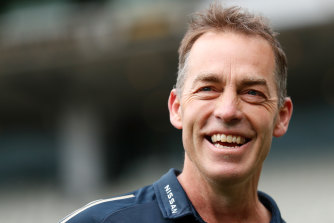 “From this far out, if I was unemployed like I am now I’d be putting my hand up big time to get involved in such an exciting venture,” he said.

Clarkson was strongly linked with the then vacant Collingwood and Carlton roles since his departure from Hawthorn.

But he recently revealed on Fox Footy’s AFL 360 that he’d told incoming Blues CEO Brian Cook he was sticking to his decision to not be a senior coach in 2022.

“If there was perhaps a big club that you wanted to coach, Richmond, Essendon, Collingwood, [and] Carlton are the clubs but the timing just wasn’t right for me,” Clarkson said.

“I’d been doing it for 17 years…most senior coaches, they’ve only got two gears – it’s flatout, and stop. I haven’t really sat in second or third gear for a long period of time.

Clarkson said he wanted to undertake some overseas study and explore other ways of giving back to the game.

“I’ve been enormously benefitted from the fact that I’ve been at clubland for 35 years but I’d like to do something for the industry, and that includes perhaps doing some stuff for the Tassie push and their own team,” he said.

Through Hawthorn’s partnership with Tasmania, Clarkson had a 17-year involvement with football in the state and said he has “a really good affiliation with the Apple Isle”.

“Two of my great mates in Brendon Bolton and Chris Fagan are obviously from Tassie and homegrown products, and Grant Birchall – amongst others – had played for our club.

“They’ve just fallen off the radar a little bit, and the best way to get them back on the radar is to pursue this team from Tassie in the national competition, which I think would be really exciting.”