If you were at the Alitty Montclaire Aged Care home in Brighton on Tuesday between 2pm and 4pm, you may have noticed former Sydney and Brisbane cult figure Warwick Capper, leopard-print blazer and all. 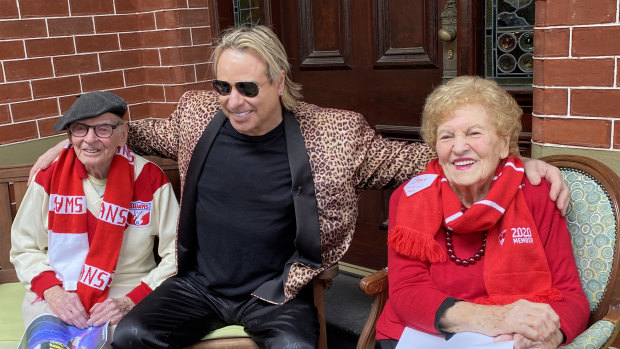 “We had no idea he was coming,” said Lindesay. “They [Alitty Montclaire Aged Care home staff] kept on referring to him as the special guest of honour. He’s [Capper] a marvellous bloke, a perfect entertainer.”

“I had a cup of tea and scones and cream with them,” he said. “It’s good to look after the old fans.”

As for his outfit, Capper said he needed to dress the part for the visit. “I was tossing up between the leopard-print one [jacket] and a pink one. I thought I’ll save that one [pink jacket] for the DJ job,” he said.

Julie Roppola, the lifestyle coordinator at Allity Montclaire Aged Care home, organised the visit with Capper after wondering how to make this year’s AFL finals memorable for the Swans supporters.

“I knew how long James and Joyce had been following the Swans, and so I googled Warwick Capper and reached out, he was kind enough to visit,” she says. “Warwick makes such an entrance, Joyce even got a kiss from him,” Ropolla said. 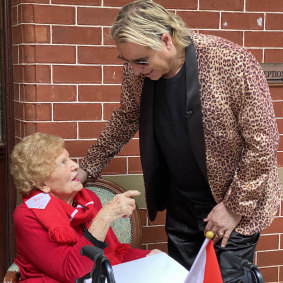 The two siblings became fans of the club in the late 1920s in its time as the South Melbourne Football Club.

James has witnessed a few Swans premierships and many finals, but although they are favourites this week against Collingwood, he is still apprehensive.

“I hope they win this week, but Collingwood is going to be hard to beat. It’s going to be a rough game on both sides,” he said.

Despite the surprise of seeing Capper on Tuesday, this isn’t the first time Lindesay has gotten the star treatment from a former Swan. On his 100th birthday, Lindesay received a South Melbourne jumper and a visit from Swans Brownlow medallist Peter Bedford.

“It [the South Melbourne jumper] was presented to me on my 100th birthday, from Peter Bedford, a Brownlow medallist,” he said.

“He also brought the medal with him, I’m surprised how small and thin it was. He let me wear the Brownlow Medal. I just couldn’t believe it.”

If the Swans win the premiership, Capper says he will be back to visit the pair.

“I think [on] Sunday we will win by two goals, and then we might be able to fix up Geelong,” he said.

“If we win the grand final I’ll have to go visit them again.”

Chance Bateman: Respect the Riolis, and learn from their experience