Home » Rugby » Would the NSW B team beat this Queensland side?

NSW are on the verge of re-writing the State of Origin record books and the sad reality for Queensland is that even if the Blues picked a second-string team for game three, you could argue very little would change.

Ryan Papenhuyzen, Clint Gutherson, Stephen Crichton, Kotoni Staggs, Dale Finucane and Victor Radley – just to name a few – haven't featured in this year's Origin series. They would all walk into the Queensland side for game three. 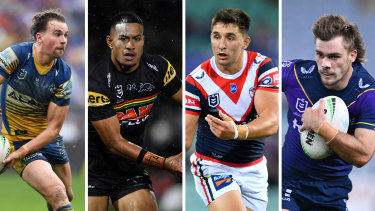 The embarrassment of riches at NSW’s disposal only amplifies the woes of a state that has very few places to turn given their lack of depth, which is reflected in the struggles of the three Queensland-based NRL teams that could all miss the finals for the second consecutive year.

Kalyn Ponga, Reece Walsh, Harry Grant and Sam Walker are the pillars of hope, but beyond that there is very little to get excited about when it comes to the stocks of the once proud state. NSW on the other-hand have a plethora of talent at their disposal, both ready now and developing for the coming years.

“As a NSW fan I’m disappointed they couldn’t get last year done, because all of a sudden they would have four series in a row and be challenging the great Queensland record and have their own dynasty,” Paul Gallen told the Herald on Monday afternoon.

During the Maroons dynasty, in which Mal Meninga's men claim a record eight consecutive series wins, Queensland never experienced the dominance NSW have enjoyed in the opening two games of the series.

*Scroll to bottom to vote for your NSW B team

The previous biggest aggregate series margin was set by NSW in 2000 when they swept the Maroons by a combined 62 points in three games. NSW are already up by 70 through two games.

To put that in perspective, the best the Maroons could manage throughout their eight year dynasty was 37 points in the series in 2010.

“Most of the time we came close, but the difference between the two sides was the fact they had the best players in the most important positions,” Gallen said. “In big moments in major games, when the most important decisions had to be made, they made them every time. Eight times in a row it came off.”

NSW are also eyeing out the most points scored in a series, which was set by the Blues of 2000 when they notched up 104 points. Just 29 points are required in game three for this Blues team to surpass that. 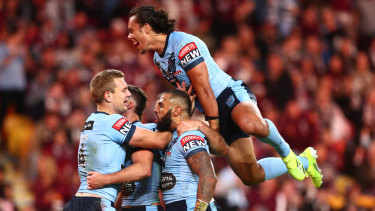 “That backline is unbelievable,” Gallen said. “Best I’ve ever seen.”

Trbojevic has now scored nine tries in his first seven appearances, equalling Valentine Holmes for the most four-pointers in that many games to start an Origin career. The most prolific Origin tryscorers of all-time – Greg Inglis, Darius Boyd and Dale Shearer – had only scored five at the same points in their respective careers.

Gallen, who spent four days in Queensland leading up to Origin two, said the locals were beginning to lose hope.

“The thing they kept saying to me was if NSW keep winning, Origin is dead,” Gallen said.

“I laughed at them and said ‘you’re kidding aren’t you?’. We went through it for eight years and Origin got bigger and better every year. Numbers increased and crowds kept coming. They hadn’t even lost the series yet but they were saying if NSW keep winning Origin is dead.

“They told me ‘you don’t know what it’s like up here the day after we lose a game, people don’t go to work’. The whole state is depressed.”

‘I need to play footy’: Grant asks Storm for release to join Tigers